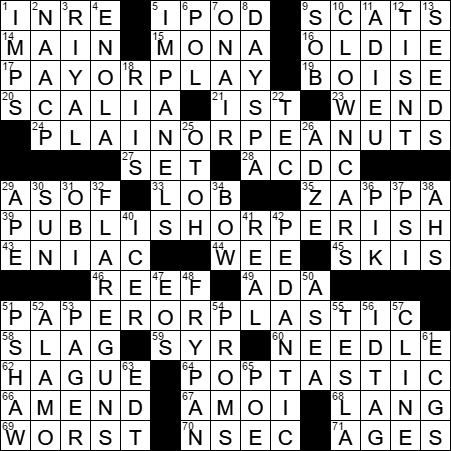 “Mona Lisa” is a marvelous 1950 song that topped the charts for Nat King Cole for eight weeks. The song was written for the film “Captain Carey, U.S.A.” that was released that same year, starring Alan Ladd. “Mona Lisa” won the Oscar for Best Original Song.

Major players in the film industry have the box-office power to demand “pay-or-play” contracts when signing up for a movie. Such contracts guarantee the individual full payment, or a substantial part of the full payment, should the film not go into production.

Boise, Idaho is the largest metropolitan area in the state by far. There are a number of stories pertaining to the etymology of the name “Boise”. One is that French trappers named the tree-lined river that ran through the area “la rivière boisée”, meaning “the wooded river”.

In its early days the city of Moscow, Idaho was known as Paradise Valley, with the name change taking place in 1875. The choice of “Moscow” seems unexplained, but it is more likely related to Moscow, Pennsylvania than Moscow, Russia. Moscow is home to the University of Idaho.

Antonin Scalia was appointed to the Supreme Court by President Reagan in 1986, and was the longest serving member of the court on the occasion of his passing in 2016. Justice Scalia’s minority opinions were known for the scathing language that he used to criticize the Court’s majority.

Peanut M&M’s were introduced in 1954, and at first were only produced in a tan color.

Frank Zappa was an American composer and guitarist, a solo artist as well as the founding member of the rock band Mothers of Invention. You might like to meet Zappa’s four children: Moon Unit, Dweezil, Ahmet Emuukha Rodan, and Diva Thin Muffin Pigeen.

The phrase “publish or perish” is commonly used in the world of academia to describe the pressure to continually produce academic papers in order to further one’s career. The phrase probably dates back to the 1920s.

The acronym ENIAC stands for Electronic Numerical Integrator and Calculator (although many folks insist that the C was for “Computer”). ENIAC was introduced at the University of Pennsylvania in 1946, at which time it was the first general-purpose electronic computer. Its original purpose was the calculation of artillery firing tables, but it ended up being used early on to make calculations necessary for the development of the hydrogen bomb. Given its uses, it’s not surprising to hear that development of ENIAC was funded by the US Army during WWII.

Den Haag is the Dutch name for the city in the Netherlands that we know in English as The Hague. Even though The Hague is the seat of the Dutch parliament and is where Queen Beatrix resides, it is not the country’s capital city. That honor goes to Amsterdam.

k.d. lang is the stage name of Kathryn Dawn Lang, a Canadian singer and songwriter. Beyond her performing career, lang is a noted activist focused on animal rights, gay rights, and human rights in Tibet.

The full name of the NAACP, the National Association for the Advancement of Colored People, is remarkable in that it actually still uses the offensive term “colored people”. The NAACP was founded in 1909, by a group that included suffragette and journalist Mary White Ovington, wealthy socialist William English Walling, and civil rights activist Henry Moscowitz. Another member of the founding group was W. E. B. Du Bois, the first African-American to earn a doctorate at Harvard University. The date chosen for the founding of the NAACP was February 12th, 1909, the 100th anniversary of the birth of President Abraham Lincoln, the man most visibly associated with the emancipation of African-American slaves.

5. Populates, as a grand jury : IMPANELS

A grand jury is a group of 16-23 citizens who are empowered to investigate potential criminal conduct. Only the US and Liberia use grand juries today, with the rest of the world employing other forms of preliminary hearing. The phrase “grand jury” has its roots in French, with “grand” implying “large”. The 12-person jury used in a criminal trial can be referred to as a “petit” (small) jury.

“Cher” is the French for “dear”. The spelling is “chère” when used with a feminine noun.

Jacob Riis is famous for his photographs and newspaper articles that highlighted the plight of the impoverished in New York City. He wrote “How the Other Half Lives”, originally an extensive article that appeared in “Scribner’s Magazine” at Christmas 1889. The article had such an impact that Riis was commissioned to expand it into a book, which was published the following year.

“Tec” is a slang term for a private detective, a private investigator (PI).

A cooper is a craftsman who makes wooden vessels, such as barrels. The term “cooper” ultimately derives from the Latin “cupa” meaning “barrel”.

The sash worn as part of traditional Japanese dress is known as an obi. The obi can be tied at the back in what is called a butterfly knot.

The most commonly used flare gun was invented by an American naval officer, called Edward Wilson Very. He put his name to his invention (from the late 1800s), so we often hear the terms Very pistol, Very flare, and maybe even Very “light”. A Very pistol is indeed a gun, with a trigger and a hammer that’s cocked and can be reloaded with Very flares.

Waterpik is a brand name of oral irrigator, a device that uses a stream of water to remove food debris and dental plaque from the teeth. There are claims made that water irrigators are more effective than dental floss.

Pounds Per Square Inch (PSI) is a measure of pressure.

I don’t use Twitter, but I understand that some celebrities use the word “real” before their name in a user ID. The idea is to distinguish themselves from users impersonating them.

A pedant, someone who is pedantic, is a person “who trumpets minor points of learning”, a person who tends to nit-pick. “Pedant” comes via Middle French from the Italian word “pedante” meaning “teacher”.

eos Products is a company that was founded in 2006 in New York City. eoS sells beauty products such as lotions and creams, and is most famous for its lip balm. The initials “eos” stand for “Evolution of Smooth”.

The US post office issued a 3-cent stamp in 1936 that commemorated 100th anniversary of Texas’s independence from Mexico. The stamp features the portraits of Sam Houston and Stephen Austin on either side of the Alamo.

“The Fall of the House of Usher” is perhaps the most famous short story by Edgar Allan Poe, first published in 1839. The story is a Gothic tale, an interview with Robert Usher in his house which literally “falls”, breaks into two and is swallowed up by a lake. Some believe that the story was inspired by events at a real Usher House that once stood on Boston’s Lewis Wharf. When the Usher House was torn down, the bodies of a man and woman were found embracing in a cavity in the cellar, a fact reflected in the story as Robert Usher’s sister is supposedly buried alive in the crypt.

5. Populates, as a grand jury : IMPANELS