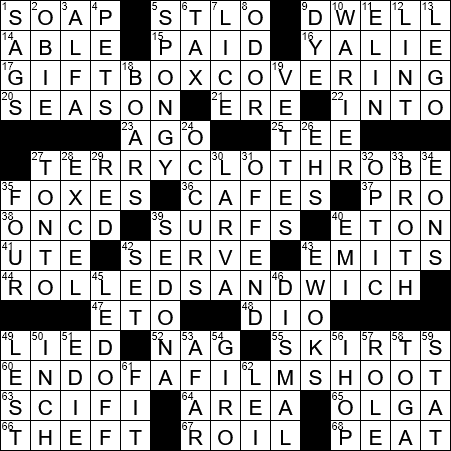 Today’s Theme (according to Bill): That’s a Wrap

Terry cloth is a fabric designed to absorb lots of liquid. The fabric has relatively large loops of thread that improve the absorption properties. The larger the loop, the more thread, the better the absorption.

The world-famous Eton College is just a brisk walk from Windsor Castle, which itself is just outside London. Eton is noted for producing many British leaders including David Cameron who was British prime minister from 2010 to 2016. The list of Old Etonians also includes Princes William and Harry, the Duke of Wellington and George Orwell. Author Ian Fleming was also and Eton alumnus, as was Fleming’s iconic character James Bond, although the 007 was expelled by the school.

Peat moss is actually sphagnum moss that has partially decayed and dried. The term “peat moss” is used as sphagnum moss is often found in peat bogs. Sphagnum moss has the ability to store large quantities of water, so the dried form is used by gardeners to condition soil, i.e. to increase the soil’s capacity to retain moisture.

Mulch is a layer of material applied by gardeners over the top of soil. The intent can be to retain moisture, to add nutrients, to reduce weed growth, or just to improve the look of the garden.

Lice (singular “louse”) are small wingless insects of which there are thousands of species, three of which are human disease agents. The three kinds of lice affecting humans are head lice, body lice and pubic lice. Most lice feed on dead skin found on the body of the host animal, although some feed on blood. Ick …

8 Reason to use Febreze : ODOR

The odor-eliminating product we know today as Febreze was developed in England in the early nineties. It is now produced by Procter & Gamble.

Elin Hilderbrand is an author of romance novels who was once dubbed “the queen of summer beach read” by the “New York Post”. When growing up, she spent her summers on Cape Cod, and now lives on Nantucket Island. As a result, Hilderbrand sets all of her works on and around Nantucket.

A feral pig is a wild pig that is descended from domesticated pigs that have escaped captivity. Here in North America, we often use the terms “razorback” and “wild hog” to describe both feral pigs and true wild boar.

The Chevrolet Corvette was introduced to the world in 1953, and was named after the small maneuverable warship called a corvette. The “Vette” has legs. It is the only American sports car that has been around for over 50 years.

The textile known as silk is made from a natural protein fiber produced from the cocoons of the larvae of the the mulberry silkworm. Ethical vegans tend to avoid silk as many, many silkworms die in order to produce a relatively small amount of fabric. Raw silk is obtained by boiling the silkworms alive inside the cocoons that yield the fibers.

The optic nerve enters the eyeball at a location on the retina called the optic disc. Because there are no light-sensitive cells at the optic disc, there is a “hole” in our visual field that is called the blind spot. People with normal vision don’t usually notice this blind spot as the brain “fills in” the blind spot with information from the other eye.

The Arizona city of Flagstaff is named for a flagpole that was erected by a scouting party in celebration of the US Centennial on July 4th, 1876.

The Applebee’s chain of “Neighborhood Bar & Grill” restaurants was founded in 1980, with the first Applebee’s eatery opening in Decatur, Georgia. When it comes to “chain” restaurants, I quite like Applebee’s …

58 Costume made from a sheet : TOGA

Honolulu International Airport in Hawaii was renamed in 2012 to honor Senator Daniel K. Inouye, who had represented the state for almost 50 years. Back in the early fifties, Honolulu Airport was the third-busiest in the country, and its 13,000-foot runway was the longest in the world. The airport’s IATA code is “HNL”.