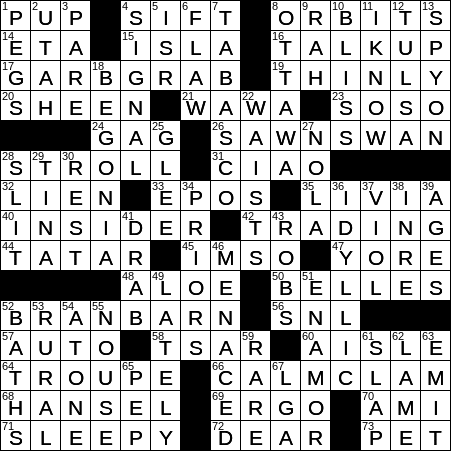 Themed answers each comprise two 4-letter words. The pairs of words are the same, except for the TRADING of the place of the INSIDE two letters:

The word “litter” has existed in English since the 1300s, when it meant “bed” (the modern French word for bed is related, i.e. “lit”). In the late 1500s, “litter” also came to mean “offspring of a single birth” i.e. collection of offspring born in the one bed at the same time.

A wah-wah (also “wa-wa”) pedal connected to an electric guitar alters the tone of the signal created so that it mimics the human voice.

Livia Drusilla (aka “Julia Augusta”) was the third wife of the Emperor Augustus, and a powerful woman in the Roman Empire. In the exceptional fictional work “I, Claudius” by Robert Graves, Livia doesn’t come across at all well, and is portrayed as quite the schemer, and very much the key individual who led to her grandson Claudius winning the imperial throne.

“I’m So Tired” is a sleepy little song from the Beatles’ “White Album”. It was written by John Lennon one night when he couldn’t sleep, while on a transcendental meditation retreat in India. There is some mumbling in the background of the song at the very end that some people say, when played backwards, are the words “Paul is a dead man. Miss him. Miss him. Miss him.” Further evidence cited in the “Paul is dead” conspiracy …

The Grand Prince of Moscow Ivan IV became known as “Ivan the Terrible”. The name “terrible” is a translation from Russian, and perhaps creates the wrong impression about the man. The Russian word is “Grozny”, which is more akin to “strict” and “powerful” rather than “cruel” or “abominable”.

“Wasatch Front” is the name given to a chain of cities and towns in Utah stretching from Nephi in the south to Brigham City in the north. The list of metropolitan areas includes Salt Lake City, Provo and Ogden, and is home to 80% of Utah’s population. The chain lies to the east of the Wasatch Mountains, hence the name.

3 Opposite of embiggen : PARE

To embiggen, is to make bigger. Really, it is …

Edward McIlhenny created the first Tabasco Sauce in 1868. He recycled old cologne bottles as a container for the sauce so that he could present it to friends, and when he went into business he ordered new cologne bottles for the commercial product. Even today, the Tabasco Sauce bottle bears a striking resemblance to the bottle used to distribute 4711 cologne.

12 Home of the Drillers of Class AA baseball : TULSA

The Tulsa Drillers are a minor league affiliate of the Colorado Rockies. The batting coach for the Tulsa Drillers was killed in 2007 when a line drive hit him in the neck, and rupturing an artery. Very sad …

37 Member of a Baroque consort : VIOL

The viola da gamba (also called simply “viol”) is a bass instrument in what is known as the viol family, with a tonal range that about matches that of the modern-day cello. It is the second largest of all the viols, so is played resting on the floor between the legs. In fact, “viola da gamba” is Italian translating into “viol for the leg”.

The Oregon Treaty of 1846 settled a dispute between the US and the UK over sovereignty of the Oregon Country. “The Oregon Country” was the name given by the Americans to a large swathe of land west of the Rocky Mountains. That same disputed land was known as the Columbia Department by the British. Oregon became is a US state in 1859.