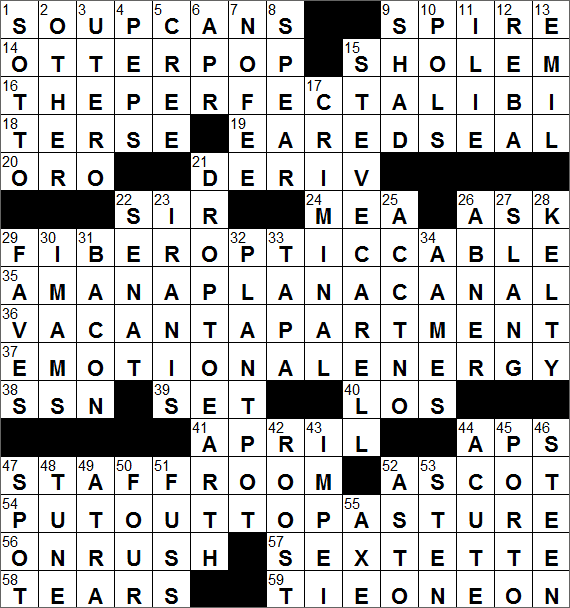 “Shalom aleichem” translates from Hebrew as “peace be upon you”. Sholem Aleichem was also the pen name of Yiddish author Solomon Rabinovich, who wrote the stories about Tevye the Dairyman who inspired the musical “Fiddler on the Roof”.

The etymology of a word is the derivation of that word.

President Obama signed “The Medicare Access and CHIP Reauthorization Act” in April of 2015. Among other things, the bill calls for the removal of Social Security Numbers (SSNs) from Medicare cards, a move designed to protect cardholders from identity theft.

The sun sets, goes down, for example.

Los Banos isn’t too far from here, and lies in the San Joaquin Valley of California. The original name of the city was “Los Baños”, the Spanish for “the baths”, a homage to the nearby source of water, the San Joaquin River. Even though the city’s name is spelled without the tilde, it is still pronounced “los banyos”. Go figure …

The Advanced Placement (AP) program, as many of us parents know, offers college-level courses to kids who are still in high school. After being tested at the end of the courses, successful students receive credits that count towards a college degree.

“Sextette” is a 1978 comedy-musical film starring the fabulous Mae West. The movie is based the play “Sex”, which West herself wrote and starred in on Broadway way back in 1926. “Sextette” was to West’s last film appearance, as she passed away two years later in 1980. From what I’ve read, it’s not a great movie at all, despite an outstanding cast that includes Timothy Dalton, Dom DeLuise, Tony Curtis, Ringo Starr, George Hamilton, Alice Cooper, Keith Moon Walter Pidgeon, Regis Philbin and George Raft. Whew!

“To tie one on” is a slang expression meaning “to get drunk”.

“Pretty Boy” is a song released by the Norwegian pop duo M2M.

M2M were a pop duo from Norway comprising Marion Raven and Marit Larsen. The pair’s friendship began when they were only five years old, and they formed their first band, called “Hubba Bubba”, when they were at the ripe old age of eight years. At 12, they released an album for children under the name “Marion & Mariot”. It was this early name for the duo that evolved into “M2M”. The pair disbanded, with both now pursuing solo careers.

“Demían: The Story of Emil Sinclair’s Youth” is a coming-of-age novel by Hermann Hesse. When first published in 1919, Hesse used the pen name “Emil Sinclair”, the name of the story’s narrator.

Qom (also Qum) is a city in Iran located about 100 miles southwest of Tehran. Qom is a holy city in the Shi’a Islam tradition, and a pilgrimage destination.

“Li’l Abner” was created and drawn by Al Capp for over 43 years starting in 1934. Al Capp stopped producing the strip in 1977, largely due to illness (he died from emphysema two years later). As the strip finished up, he went so far as to apologize to his long-standing fans, saying that he should have stopped 3-4 years earlier as he felt that the quality of his work had gone down in those latter years.

Kelty is company based in Boulder, Colorado that manufactures backpacks, tents and sleeping bags. The business was founded by Dick Kelty, who many consider to be the inventor of the aluminum-framed backpack.

In Spain, the “aperitivo” is a snack that usually includes drinks, and that takes place before lunch. It sounds like a “warmer upper” for lunch!

Willie Aames is an actor from Newport Beach, California. Aames is best known for playing Tommy Bradford on the TV comedy “Eight is Enough” that originally aired in the seventies.

The John F. Kennedy Presidential Library is a splendid structure located right beside the Boston campus of the University of Massachusetts. President Kennedy chose the location for his library just one week before he was assassinated. The library itself was designed by architect I. M. Pei.

Pôrto Alegre is the capital of the state of Rio Grande do Sul in southern Brazil. The city was founded in 1772 by immigrants from the Azores, and later received a big influx of immigrants from Germany, Italy and Poland. Most of the residents of Pôrto Alegre today are descendants of those Europeans.

Fortunately for crossword setters, the Atra razor was introduced by Gillette in 1977. The Atra was sold as the Contour in some markets and its derivative products are still around today.

The term “pink-slip” can be used as a verb meaning “to terminate an employee”. No one really seems to know for sure where the term originated, but there are lots of stories.

1…Line at the supermarket..SOUP CANS

37…Investment in a relationship..EMOTIONAL ENERGY

21…Be affected by gravity..DROP TO EARTH