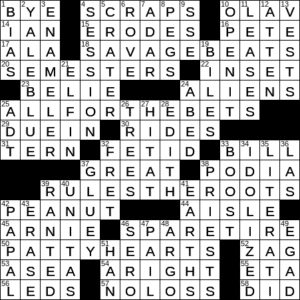 Themed answers are common phrases with an ST at the end switched to TS:

Ian Bremmer is a political scientist who founded the political risk research firm Eurasia Group in New York City in 1998.

16 Fountain with a wind : PETE

Pete Fountain was a New Orleans clarinetist. For four years Fountain played with the Lawrence Welk orchestra, but left when he and Welk had artistic differences.

A Jumbotron is a big-screen television system that is often seen in sports stadiums. The brand name “JumboTron” was introduced by Sony in 1985. “Jumbotron” is used pretty generically now for any big-screen system in such venues as Sony exited the business in 2001.

The dark azure color known as “Yale Blue” was adopted by the university in 1894. Prior to that year, Yale had been associated with a green color.

7 Month between Shevat and Nisan : ADAR

19 “Greatest gymnast ever,” per Retton : BILES

Tundra is an ecosystem that is treeless, or very nearly so. There are three types of tundra. Arctic and Antarctic tundra can’t support the growth of trees as the ground is pretty much frozen. Alpine tundra cannot support tree-growth due to high altitude.

35 Ones who do things by the book? : LITERATI

38 Aaron and Eli, in the Old Testament : PRIESTS

In the Bible and the Qur’an, Aaron was the older brother of Moses and was a prophet. Aaron became the first High Priest of the Israelites.

In the Bible, Eli is a High Priest of Shiloh and the teacher of Samuel. As such, his story is told in the Book of Samuel. Eli had two sons, Hophni and Phinehas, both of whom are described as wicked. As a result of their wayward lifestyle, it is prophesied that all of Eli’s male descendents will die before reaching old age.

40 “The Golden Arm” of the Baltimore Colts : UNITAS

Footballer Johnny Unitas was nicknamed “the Golden Arm” as well as “Johnny U”. Unitas played in the fifties through the seventies, mainly for the Baltimore Colts. He held the record for throwing touchdown passes in consecutive games (47 games) for 52 years, until it was surpassed in 2012 by Drew Brees.

A bulla (also “bull”) is a type of seal impression. A papal bull is a formal document from the Vatican that has such a seal attached, hence the name of the document.

The prefix “sero-” represents the word “serum” in a compound word.

48 Ship that sailed from Iolcus : ARGO