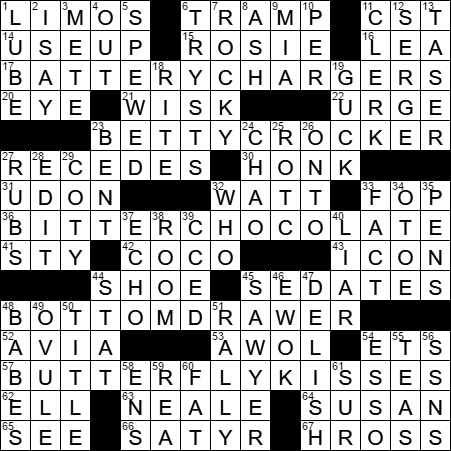 Today’s themed answers start with the letters BxTT- with “x” standing for a vowel. Those x-vowels progress from A through U from the top of the grid to the bottom:

A “vagabond” is a person without a home who moves from place to place. The term derives from the Latin “vagabundus” meaning “wandering, strolling about”.

The US states of Michigan (MI) and Missouri (MO) are on Central Standard Time (CST).

21. “Ring around the collar” detergent : WISK

Betty Crocker was introduced by the Washburn Crosby Company (now part of General Mills) in 1921. “Crocker” was chosen in honor of William Crocker who was one of the company’s directors. “Betty” was selected simply because it was considered a bright, all-American name. Betty’s original job was to sign her name on correspondence arising out of consumer product questions, but soon she evolved into a very successful brand name.

The moccasin is a traditional form of footwear worn by members of many Native American tribes.

In the marvelous Sherlock Holmes stories by Sir Arthur Conan Doyle, Holmes’ sidekick Dr. Watson is referred to only by his family name, except for two occasions when it is revealed that his first name is John. However, in a third and final mention, Dr. Watson is called “James” by his wife, apparently a lapse in memory on the part of the author.

Mia Farrow is an energetic, award-winning actress who really hasn’t looked back in her career since her first leading role, in “Rosemary’s Baby” back in 1968. Her on-screen celebrity is matched by the interest created by her personal life. Her first husband was Frank Sinatra, a wedding in 1966 that received a lot of attention partly due to the couple’s age difference (she was 21, he was 50). Her second husband was almost as famous, the magnificent musician André Previn. Farrow then moved in with Woody Allen, a relationship that famously fell apart when Farrow discovered that Allen was having a sexual relationship with Soon-Yi, one of her adopted daughters from the marriage with André Previn.

The verb “to twill” means to weave a cloth (called a twill) that has a pattern of diagonal parallel ribs.

When President George W. Bush appointed Elaine Chao as Secretary of Labor, he made a bit of history as Chao became the first Chinese American in history to hold a cabinet post. It turned out that Chao became the only cabinet member to hold her post for President Bush’s full eight years in office. In 1993, Chao married Mitch McConnell, the Republican Leader of the US Senate.

Tom Sawyer is a favorite character created by Mark Twain. He turns up in four of Twain’s books:

But that’s not all, as he appears in at least three works that Twain left unfinished:

The Ewoks are creatures who live on the moon of Endor, first appearing in “Star Wars Episode VI: Return of the Jedi”. They’re the cute and cuddly little guys that look like teddy bears.

An “ovule” is a small structure in many plants that develops into the seed after fertilization.

Tetley was founded by Joseph Tetley in Yorkshire in 1837. Joseph and his brother used to sell salt door-to-door from a pack horse and started to distribute tea the same way. They became so successful selling tea that they relocated to London. Notably, Tetley’s was the first company to introduce tea bags in the UK, back in 1953.

Big Sur is a lovely part of the California Coast, south of Monterey and Carmel. The name “Big Sur” comes from the original Spanish description of the area as “el sur grande” meaning “the big south”.

21. “Ring around the collar” detergent : WISK

36. Confection not as sweet as the “milk” variety : BITTER CHOCOLATE