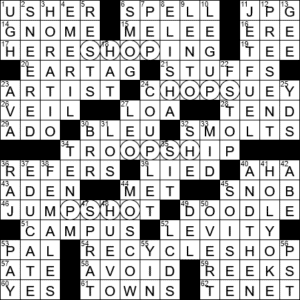 Themed answers each include the letter sequence S-H-O-P, but in a different order, RECYCLED:

In French, someone who is “bleu” (blue) is sad.

The “Horatio Hornblower” series of novels was written by English author C. S. Forester. Hornblower is an officer in the Royal Navy during the Napoleonic Wars.

A hat trick is the scoring of three goals by the same player in a game of say, soccer or hockey.

The California city of Los Angeles (L.A.) is the second most populous city in the country, after New York. L.A. was established in 1781 as a pueblo named “El Pueblo de Nuestra Señora la Reina de los Ángeles del Río de Porciúncula”, which translates as “The Town of Our Lady the Queen of Angels of the Porciúncula River”. This name evolved into “Los Angeles”, and the Porciúncula River is now called the Los Angeles River.

Mount Holyoke College is a private school for women located in South Hadley, Massachusetts. It was founded as Mount Holyoke Female Seminary in 1834 as the sister school to Andover Seminary.

“Jack Sprat” is a nickname given in the 16th century to people of small stature. Jack featured in a proverb of the day: