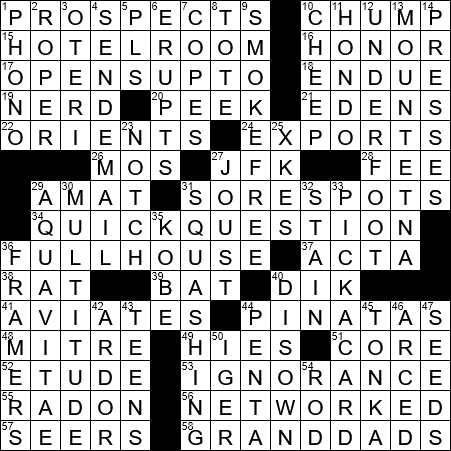 César Ritz was a Swiss hotelier, who had a reputation for developing the most luxurious of accommodations and attracting the wealthiest clientèle. He opened the Hotel Ritz in Paris in 1898 and the second of his most famous hotels, the Ritz Hotel in London, in 1906. Ritz was lucky in his career, as before starting his own hotel chain he had been dismissed from the Savoy Hotel in London, implicated in the disappearance of a substantial amount of wine and spirits. Today’s Ritz-Carlton Hotel Company was founded in 1983, although the chain has its roots in the properties developed by César Ritz.

“If I Ran the Zoo” is a book written by Dr. Seuss and published in 1950. Apparently this book is famous for using the word “nerd”, which was the first time it had been seen in print.

There are three months (mos.) in a quarter (qtr.).

“JFK” is a 1991 Oliver Stone movie, and a controversial one I’d say. I suppose any work that deals with the tragic death of President Kennedy is bound to create a stir these days.

36. One may include three kings : FULL HOUSE

That would be poker.

Actum (plural “acta”) is the Latin word for “deed”. “Acta” is used in English to describe many official records, including minutes, proceedings etc.

New York cartoonist Dik Browne was best known for the comic strips “Hagar the Horrible” and “Hi and Lois”.

Our word “aviation” is a relatively new term. It was coined in 1863 by French aviation pioneer Guillaume Joseph Gabriel de La Landelle in a book titled “Aviation ou Navigation Aérienne” (Aviation or Air Navigation). He used the Latin “avis”, meaning “bird”, as the stem for his new word “aviation”.

A miter is a traditional headdress worn by bishops in some Christian traditions. The name “miter” comes from a Greek word for “headband, turban”.

55. Gas that glows when condensed : RADON

Famously, Thomas Edison invented the phonograph in 1877, which was a device that recorded sound onto wax phonograph cylinders. The flat disc phonograph record was developed by Emile Berliner, a German-born American inventor. Berliner called his flat disc record player a “gramophone”, and started selling Berliner Gramophone records in 1894.

A texter might type Pls (please) and TY (thank you).

The 1953 western movie “Hondo” stars John Wayne and is based on the novel “The Gift of Cochise”, written by Louis L’Amour.

John Wayne was named Marion Mitchell Morrison at birth, after his grandfather who was a Civil War veteran. When young Marion was a little boy, a local fireman used to call him “Little Duke” because he was always seen walking with his large dog called “Duke”. Marion liked the name “Duke” and so he called himself Duke Morrison for the rest of his life. That said, Duke Morrison also used John Wayne as a stage name.

XK and XK-E are models of Jaguar motor car.

“Aqua vitae” is Latin for “water of life”. The original use of the term was for a concentrated solution of ethanol. Over time “aqua vitae” became the term used for distilled spirits and also wine. “Water of life” translates into Scots Gaelic as “uisge-beatha” and into Irish as “uisce beatha”. These terms give rise to our modern word “whiskey”.

The word “legion” can be used to mean “a large number”.

Kobe is a city on the island of Honshu in Japan. Here is North America, the city of Kobe is perhaps most famous for its beef. And yes, basketball star Kobe Bryant is named after that very same beef.

By one definition, the Founding Fathers were the leaders of the American Revolution against the British Crown. By another, they were the individuals who signed the Declaration of Independence in 1776. The term “Framers” is sometimes confused with “Founding Fathers”. According to the National Archives, the Framers were the 55 delegates to the 1787 Constitutional Convention, those who played a key role in drafting the Constitution of the United States. The phrase “Founding Fathers” is a relatively recent term, and one coined by future US president Warren D. Harding in 1916.

Definitions vary, but it seems that the term “Generation Z” is reserved for the children of “Generation X”, and for the generations that follows the “Millennials” (Generation Y).

A pentagram is a star-shape with five points that has been drawn using five straight lines. The name “pentagram” comes from the Greek for “five line”. The shape is sometimes also called a “pentacle”, “pentalpha” or “pentangle”. The pentagram is used as a prominent symbol in several religions and movements, notably in modern occultism.