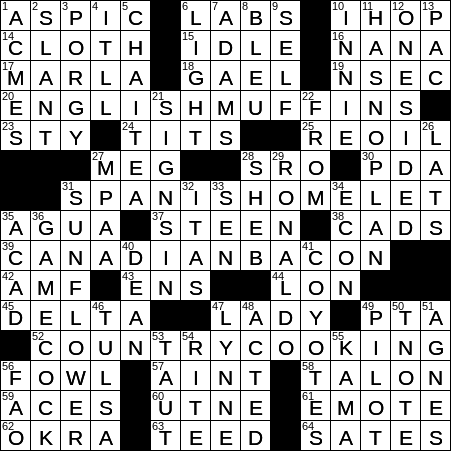 Themed answers are COOKED foods named for a COUNTRY:

Aspic is a dish in which the main ingredients are served in a gelatin made from meat stock. “Aspic” is a French word meaning “jelly”.

Marla Maples was the second wife of Donald Trump. Maples and Trump dated secretly for a couple of years while Trump was still married to his first wife Ivana. When Ivana discovered the affair, she filed for divorce, and eventually Donald and Marla married. It was Trump’s turn to file for divorce several years later after the National Enquirer outed Marla for having an affair with a Florida bodyguard.

The birds known as chickadees or titmice in North America, are usually called simply “tits” in the rest of the English-speaking world.

What we refer to as a Spanish omelet is known as a “tortilla española” in Spanish cuisine. The basic version of the dish is made with eggs and potatoes, and possibly some onion.

What we tend to call “Canadian bacon” in the US, we know as “rashers” on the other side of the Atlantic. One of my uncles worked in the meat trade in Dublin, and his nickname was “Rasher”.

3. Lover of Bess, in Gershwin : PORGY

7. President between Washington and Jefferson : ADAMS

John Adams was the second President of the United States. I must admit that I learned much of what I know about President Adams in the excellent, excellent HBO series “John Adams”, which is based on David McCullough’s 2001 biography of the same name. Having said that, I have also visited the Adams home in Quincy, Massachusetts several times. He was clearly a great man with a great intellect …

Being a bit of a French speaker (admittedly, a very poor one), the term “bleu” cheese has always kind of irritated me. I would prefer that we use either “blue cheese” or “fromage bleu” and not mix the languages, but then I can be annoyingly picky! It’s said that blue cheese was probably discovered accidentally, as molds tend to develop in the same conditions that are best for storing cheese. The blue mold in the cheese is introduced by adding Penicillium spores before the cheese is allowed to set. And yes, it’s the same mold that is used to produce penicillin, the antibiotic.

As well as having his huge hit in 1958 called “The Purple People Eater”, Sheb Wooley played Ben Miller in the movie “High Noon” and co-starred in the TV’s “Rawhide”, playing the role of Pete Nolan. Wooley also wrote the theme song for the long-running television show “Hee Haw”.

The US Senate comprises 100 senators, with each of the fifty states being represented by two popularly elected senators. US senators were appointed by their state legislators from 1798 until 1913, until the Seventh Amendment called for popular elections.

The University of South Carolina’s sports teams have used the moniker “Gamecocks” since about 1900. The name was chosen in honor of a South Carolina revolutionary war hero named Thomas Sumter. Sumter’s nickname was “the Carolina Gamecock”, as British General Banastre Tarleton once said that Sumter “fought like a gamecock”.

The Jimmy Dean brand of sausage was introduced in 1969 by singer and actor Jimmy Dean. Although he was at the height of his singing and acting career in 1950s and 1960s, I best remember Dean for playing reclusive billionaire Willard Whyte in the 1971 James Bond film “Diamonds Are Forever”.

A Treasury note (T-note) is a government debt that matures in 1-10 years. A T-note has a coupon (interest) payment made every six months. The T-note is purchased at a discount to face value, and at the date of maturity can be redeemed at that face value. A T-bill is a similar financial vehicle, but it matures in one year or less, and a T-bond matures in 20-30 years.

Agnes de Mille was a dancer and choreographer from New York City. She was the niece of famous director Cecil B. DeMille, and the daughter of William C. deMille who was also a Hollywood director. Agnes turned to dance after she was told that she was “not pretty enough” to pursue her first love, which was acting …

A Jewish girl becomes a Bat Mitzvah at 12 years of age, the age at which she becomes responsible for her actions. Boys become Bar Mitzvahs at 13. The terms translate into English as daughter and son of the commandments.

“The Kama Sutra” is renowned for its descriptions of positions that can be used for sexual intercourse, but the sutra includes many other texts that deal with various matters of a sexual nature, including how to woo a woman, the conduct of a “chief wife”, the conduct of “other wives”, how to make money as a courtesan, and much more.