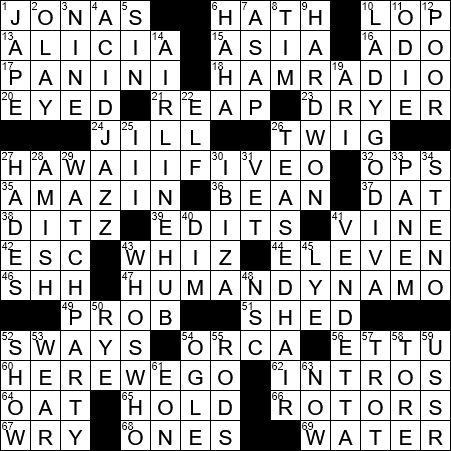 Jonas Salk was an American medical researcher who developed the first safe polio vaccine. In the fifties, especially after the 1952 epidemic, polio was the biggest health fear in the US because it killed thousands, left even more with disabilities and most of the victims were children. The situation was dire and the authorities immediately quarantined the family of any polio victim, and that quarantine was so strict that in many cases the families were not even permitted to attend the funeral of a family member who died from the disease.

The Irrawaddy River is the largest waterway in Myanmar. The Irrawaddy has been of great importance to the country since the days when it was the British colony of Burma. The British developed an extensive network of irrigation canals fed by the river, and also used the Irrawaddy to transport goods from the north of the country to the Irrawaddy Delta that leads to the Bay of Bengal and the Indian Ocean. The Irrawaddy is sometimes referred to as “The Road to Mandalay”, after Rudyard Kipling’s poem.

In Italy, a sandwich made from sliced bread is called a “tramezzino”, while sandwiches made from non-sliced breads are called “panini” (singular “panino”). We’ve imported the term “panini” into English to mean a pressed and toasted sandwich.

Amateur radio enthusiasts were originally called “ham operators” by professional telegraph operators, and the term was intended to be insulting. It came from the similar term “ham actor”, describing a person who is less than effective on the stage. But amateur operators eventually embraced the moniker, and so it stuck.

The “Jack and Jill” nursery rhyme dates back at least to the 1700s:

Jack and Jill went up the hill
To fetch a pail of water.
Jack fell down and broke his crown,
And Jill came tumbling after.

The cop show “Hawaii Five-O” originally ran from 1968 until 1980, with Jack Lord and James MacArthur playing detectives Steve McGarrett and “Danno” Williams. The famous theme music was composed by Morton Stevens. The show was rebooted as “Hawaii Five-0”, premiering in 2010, with Alex O’Loughlin and Scott Caan playing Steve McGarrett and “Danno” Williams. Notice the important difference in the titles of the two versions of the show: the former uses a capital letter O, and the latter the numeral zero. Now that’s trivial …

The New York Mets baseball team was founded in 1962 as a replacement for two teams that the city had lost, namely the Brooklyn Dodgers and the New York Giants. For several years the Mets played very poorly, finishing no better than second-to-last in their division. Then of course along came the “Miracle Mets” (aka “Amazin’ Mets”) who beat the Baltimore Orioles in 1969 to claim the World Series in a huge upset.

As we recall from English class, a noun is in the dative case when it refers to an object that is given “to” someone.

“Stranger Things” is a sci-fi horror TV show made for Netflix that aired its first season in 2016. I don’t do horror so haven’t seen it …

SeaWorld was started in San Diego in 1964. The original plan was build an underwater restaurant with a marine life show. Eventually the founders dropped the idea of the eating establishment and just went with a theme park. SeaWorld has been mired in controversy since the 2013 release of the documentary “Blackfish”, which tells of the involvement of a particular orca (killer whale) in the death of two SeaWorld employees and one SeaWorld visitor.

A turbine is a machine uses the flow of a fluid (sometimes air) to create rotational work. Simple examples of turbines are windmills and waterwheels.

69. Liquid whose chemical formula is a homophonic hint to the answers to starred clues : WATER (H2O sounds like “H to O”)

The musical genre known as “acid jazz” is also called “club jazz”. The genre originated in London clubs in the 1980s.

In the legend of Lady Godiva, a noblewoman rode naked through the streets of Coventry in England, basically as a dare from her husband in return for relieving the taxes of his tenants. Lady Godiva issued instructions that all the town’s inhabitants should stay indoors while she made her journey. However, a tailor in the town named Tom disobeyed the instructions by boring holes in the shutters on his windows, and “peeped”. As a result, Peeping Tom was struck blind, and the term “peeping Tom” has been in our language ever since.

“Bouffant” is a French word meaning “puffed out” that we’ve imported into English. Apparently, the first use of “bouffant” with reference to a hairstyle dates back to 1955.

“Hercules” is a 1997 Disney animated film about the Greek hero of mythology. In Greek mythology, the hero’s name is “Heracles”, but the movie went with the Roman version “Hercules”.

The Amish are a group of Christian churches, and a subgroup of the Mennonite churches. The Amish church originated in Switzerland and Alsace in 1693 when it was founded by Jakob Ammann. It was Ammann who gave the name to the Amish people. Many Amish people came to Pennsylvania in the 18th century.

Ibiza is a Mediterranean island located almost 100 miles off the Spanish coast. It is a very popular tourist destination, largely for its legendary nightlife.

A veterinarian (vet) is a professional who treat animals for disease and injury. The word “veterinary” comes from the Latin “veterinae” meaning “working animals, beasts of burden”.

“Panem” is the name of the fictional nation in “The Hunger Games” series of novels. Panem is in North America, with a capital city located in the Rocky Mountains, and thirteen surrounding, outlying districts. The name “Panem” comes from the Latin for “bread”.

Several publications use the phrase “Who’s Who” in the title. The oldest and best known is the British reference “Who’s Who” that has been listing prominent British people since 1849. There is a sister publication called “Who Was Who” that lists prominent people who have died since 1897.