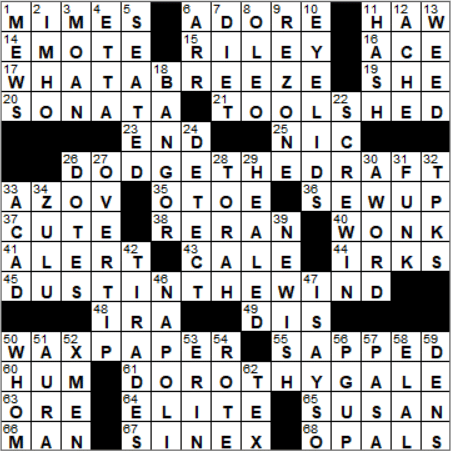 Today’s Theme (according to Bill): What a Blow!

Themed answers end with synonyms of blow, in the sense of “airflow”:

Pat Riley is a former professional basketball player and NBA head coach. Off the court, Riley is quite the celebrity and is noted as a snappy dresser. He is friend of Giorgio Armani and wears Armani suits at all his games. Riley even modeled suits at an Armani fashion show.

A “three-peat” is the winning of a sports championship three seasons in a row.

Further down the charts, and still in the top 100, were seven more Beatles songs.

The actor Nicolas “Nic” Cage was born Nicolas Coppola. Cage is the nephew of director Francis Ford Coppola and actress Talia Shire, both of whom are his father’s siblings.

26. Move to Canada to avoid military service : DODGE THE DRAFT

Many young American men moved to Canada in order to evade the draft during the Vietnam War. After the end of the war in 1975, those choosing to return to the US faced imprisonment or forced military service. In 1974, President Gerald Ford offered amnesty to draft dodgers in return for 6-24 months of alternative service. In 1977, President Jimmy Carter offered pardons to those who evaded the draft and admitted the crime.

The Otoe (also Oto) Native American tribe originated in the Great Lakes region as part of the Winnebago or Siouan tribes. The group that would become the Otoe broke away from the Winnebago and migrated southwestward, ending up in the Great Plains. In the plains the Otoe adopted a semi-nomadic lifestyle dependent on the horse, with the American bison becoming central to their diet.

Kansas is a rock band that formed in 1970s in Topeka, Kansas. The group’s biggest hits were “Carry on Wayward Son” and “Dust in the Wind”, both of which charted in the mid-seventies.

Chewing gum has been around for thousands of years, but bubblegum only dates back to 1928. It was developed by one Walter Diemer of the Fleer Chewing Gum Company. Diemer was a Fleer accountant, and apparently an accountant who liked to mess around with gum recipes in his spare time.

Susan Ross was George Costanza’s fiancee for a while on “Seinfeld”. George bought cheap, toxin-laden envelopes for Susan to mail out wedding invitations, and she died from licking the glue in them. Susan was played by actress Heidi Swedberg.

Hash, meaning a dish of beef and vegetables mashed together, is a very American dish and one that really surprised me when I first came across it. “Hash” just seems like such an unappetizing item, but I soon found out how delicious it was. The name “hash” in this context comes from the French “hacher” meaning “to chop”. Back in the early 1900s the dish called “hashed browned potatoes” was developed, which quickly morphed into “hash browns”. From there the likes of corned beef hash was introduced.

“Funk” is ill-humor, and is a word that dates back to the mid-1700s. “Funk” is probably a term that came from Scottish and northern English.

The US Air Force Academy (USAFA) is located in Colorado Springs, Colorado. I had the privilege not too long ago of visiting the Academy, and what an impressive campus it is. When the USAF Academy graduated its first class in 1959, it became the youngest of the five service academies to do so. Significantly, female candidates were first accepted by the academy in 1976, and today the graduating classes include over 20% women.

“For Whom the Bell Tolls” is a 1940 novel by author Ernest Hemingway that tells the story of an American fighting for a republican guerilla unit during the Spanish Civil War. The novel is based on Hemingway’s own experiences during the conflict. The title is taken from a work by metaphysical poet John Donne called “Devotions upon Emergent Occasions”.

In the Marvel Comics universe, mutants are beings with an X-gene. Such mutants are humans who naturally develop superhuman powers. The most celebrated of these mutants are known as the X-Men.

In Spanish, “qué pasa?” translates literally as “what happened?” But, it is used to mean “how have things been going with you?”.

According to Jewish dietary law, kosher food is fit to eat, and food that is not fit to eat is referred to as treif (or “tref”). The usage of “kosher” has extended to include anything considered legitimate.

62. One of two sts. with bordering panhandles : TEX

Those would be the Texas and Oklahoma panhandles.