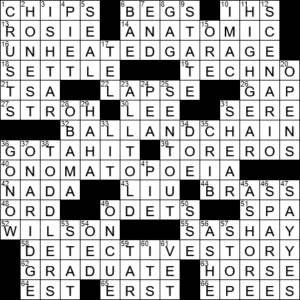 Themed answers each include a hidden name. Together, those names give DETECTIVE STORY author EDGAR ALLEN POE:

10 Latin initialism on a cross : IHS

“IHS” is an abbreviation for the name “Jesus Christ” that is sometimes used as a symbol in the Christian tradition, particularly in western Christianity. “IHS” is a Latinized form of the first three letters of “Jesus” written in Greek, i.e. iota-eta-sigma.

Techno is a type of electronic dance music that originated in Detroit in the eighties. Techno involves a heavy beat in common time, and what seems to be a lot of repetition. Not for me …

Bernard Stroh was the son of a German brewer. Stroh immigrated to the US in 1848 and set up his own brewery in 1850 in Detroit. Years later, the Stroh Brewing Company introduced a European process called fire-brewing. This results in higher temperatures at a crucial stage in the brewing process, supposedly bringing out flavor. Apparently, Stroh’s is the only mainstream American beer that still uses this process.

“Toreador” is an old Spanish word meaning “bullfighter”, but it’s a term not used any more in Spain nor in Latin America. In English we use the term “toreador”, but in Spanish a bullfighter is a “torero”. A female bullfighter in a “torera”.

Onomatopoeia is the naming of something by vocally imitating the sound associated with it. Examples of onomatopoeia are “chirp”, “clash”, “click” and “hiccups”.

“Golden Boy” is a play written by Clifford Odets that was first performed in 1937 on Broadway. There was a film adaptation released in 1939 that starred a young William Holden. “Golden Boy” was the film that launched Holden’s career.

52 President of Princeton, then the U.S. : WILSON

Woodrow Wilson was a professor at Princeton from 1890 to 1902 at which time he was promoted to president of the university. Professor Wilson had earned his PhD. at Johns Hopkins University in 1886, so that when he was elected 28th President of the United States in 1912, he became the only US President to hold a PhD.

To sashay is to strut along in a showy manner. “Sashay” is an Anglicized form of the French word “chassé”, a sliding step used in square dancing.

58 Literary genre often associated with the writer concealed in 16-, 32- and 40-Across : DETECTIVE STORY

October is National Pizza Month, an observance that was designated by the US Congress in 1987. Really …?

Piet Mondrian was a painter from the Netherlands who also lived and worked in Paris, London and New York. Mondrian’s works ranged in style from Impressionism to Abstract.

A scenario is an outline of the plot of perhaps a novel or play. The term “scenario” can also describe a sequence of hypothetical events.

Kate Brown became Governor of Oregon after having served for six years as Oregon’s Secretary of State. Brown took over as governor on the resignation of John Kitzhaber in 2015, and was elected to the office in her own right in 2016. Winning that 2016 election made her the first openly LGBT person to be elected governor of a US state.

28 “The Audacity of Hope” author : OBAMA

Barack Obama’s 2008 presidential campaign focused on the themes of hope and change. The future-president also wrote a book called “The Audacity of Hope” that was first published in 2006.

The song “Go Now” was written by Larry Banks and Milton Bennett, and first recorded by Larry’s wife Bessie Banks in 1962. The most famous version of the song was recorded by the Moody Blues, and released in the US in 1965 as “Go Now!” The exclamation point in the Moody Blues title wasn’t on the original song.

The original name of Montreal was “Ville-Marie”, meaning “City of Mary”. “Ville-Marie” is now the name of a borough in the city, the borough which includes the downtown area and “Old Montreal”. The present-day city covers most of the Island of Montreal (in French, “Île de Montréal”) that is located where the Saint Lawrence and Ottawa Rivers meet. The name “Montreal” comes from the three-headed hill that dominates the island and is called “Mount Royal”.

Those would be baseball stats.