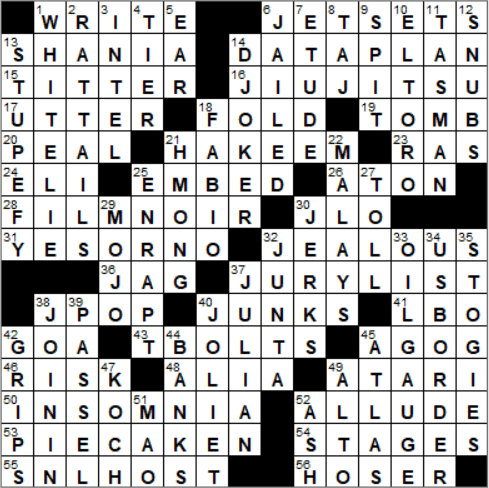 Shania Twain is a country and pop singer from Windsor, Ontario. Shania’s birth name was Eileen Edwards, and this changed to Eilleen Twain when her mother remarried. Twain changed her name to Shania in the early 1990s, around the same time that her musical career started to take off.

That would be a cell phone data plan.

Tintinnabulation is the ringing of bells. The term comes from the Latin word “tintinnare” meaning “to jingle”, which in turn is a kind of reduplication of the Latin verb “tinnire” meaning “to ring”.

Hakeem Olajuwon is a retired Nigerian American basketball player. Hakeem was born in Lagos in Nigeria, and came the US to play for the University of Houston. He was drafted by the Houston Rockets in 1984, ahead of the likes of Charles Barkley and Michael Jordan.

A mentor is a wise counselor, and the person receiving the advice is the mentee. In Greek mythology, Mentor was a friend to Odysseus, the hero of Homer’s “Odyssey”.

Eli Lilly is the largest corporation in the state of Indiana. The founder Eli Lilly was a veteran of the Union Army in the Civil War, and a failed Mississippi plantation owner. Later in life he returned to his first profession and opened a pharmaceutical operation to manufacture drugs and sell them wholesale. Under Lilly’s early guidance, the company was the first to create gelatin capsules to hold medicines and the first to use fruit flavoring in liquid medicines.

J.Lo is the nickname of singer and actress Jennifer Lopez. “J.Lo” is also the title of her second studio album, one released in 2001.

“J-pop” is an abbreviation for “Japanese pop”, a genre of music that emerged in the nineties. Although J-pop is rooted in traditional Japanese music, it is heavily influenced by western bands from the sixties such as the Beatles and the Beach Boys.

A leveraged buyout (LBO) is a transaction in which an investor acquires a controlling volume of stock in a company, but buys that stock with borrowed funds (hence “leveraged”). Often the assets of the acquired company are used as collateral for the borrowed money. There is a special form of LBO known as a management buyout (MBO) in which the company’s own management team purchase the controlling interest.

The dessert known as piecaken developed in recent years as a Thanksgiving treat. One recipe calls for three types of pie (pumpkin, apple and pecan) baked inside a cake.

George Carlin was a stand-up comic famous for pushing the envelope of comedy in the broadcast media. Despite all the controversies surrounding his act, his passing in 2008 occasioned major tributes by networks and fellow entertainers alike.

The first seven hosts of “Saturday Night Live” (in 1975) were

The Hmong people are an ethnic group from the mountains of China, Vietnam, Laos and Thailand.

The ringgit is the currency of Malaysia. The term “ringgit” is an old Malay word for “jagged”, and is a reference to the serrated edges of the silver Spanish dollars that were used in Malaya in the 16th and 17th centuries. The ringgit is divided into 100 sen.

A cabal is a small group of plotters acting in secret, perhaps scheming against a government or an individual.

40. City where Jake Blues was in prison : JOLIET

Joliet is the fastest-growing city in the state of Illinois. It is located only 40 miles southwest of Chicago. The original village of “Juliet” was established in 1834, and this name was like a corruption of “Jolliet”, after the French Canadian explorer Louis Jolliet. Juliet was renamed to Joliet in 1845.

On a film set, grips are lighting and rigging technicians who set up the infrastructure that supports lights, cameras etc. The key grip is the leader of the whole team. The first grips were technicians that worked in circuses in its early days. The name “grip” possibly comes from the bags called grips, in which the technicians carried their tools.

Ed Koch was a Democratic Representative in the US Congress from 1969-73, and then Mayor of New York City from 1978-89. From 1997 to 1999 Koch was a “judge” on the TV show “The People’s Court”. And in 2004, he collaborated with his sister Pat Koch, and wrote a children’s book called “Eddie, Harold’s Little Brother”, a tale about Ed’s own childhood experiences.

51. Leader with a jacket named for him : MAO

What we call the Mao suit in the west is known as the Zhongshan suit in China. The style was introduced by Sun Yat-sen (also known as Sun Zhongshan) as the form of national dress after the founding of the Republic of China in 1912.