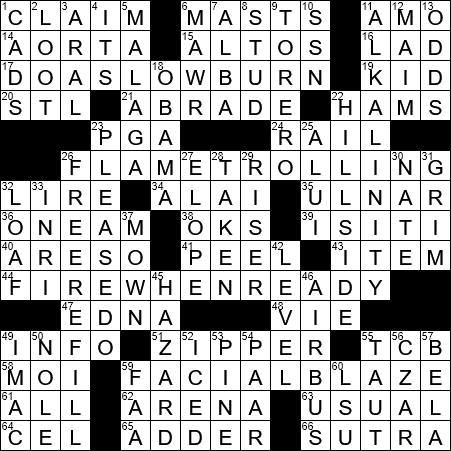 Today’s Theme (according to Bill): It’s Hot Inside

15. Choristers who are usually women : ALTOS

Rickie Fowler is a former number-one ranked amateur golfer who now plays on the PGA Tour. You’ll often see Fowler wearing orange on the course. He always wears orange on the last day of a golf tournament in honor of Oklahoma State University, his alma mater.

Flaming is an Internet phenomenon in which a person posts insults directed against another. People have been insulting each other since time immemorial, but the Internet provides a forum in which cowardly individuals can hurl insults while hiding behind anonymity.

“Incredibles 2” is a 2018 movie that is a sequel to 2004’s “The Incredibles”. Both films were written and directed by Brad Bird. Bird was also a cast member for “Incredibles 2” as he voiced Edna Mode, a fashion designer for superheroes.

The use of the word “skinny” meaning information, comes from WWII military slang for “the truth”, probably a derivative of the expression “the naked truth” (evocative of “skinny-dipping”).

The word “sutra” is used in Hinduism for a learned text, one usually meant to be studied by students.

Malaga is a fortified sweet wine from the city of Málaga in Spain.

Málaga is the capital city of the Autonomous Community of Andalusia in Spain. Located on the Mediterranean coast, it is considered the southernmost large city in Europe, and lies about 80 miles north of Africa. Included in the list of notable people born in Málaga are artist Pablo Picasso, and Hollywood actor Antonio Banderas.

Bryn Mawr College in Bryn Mawr, Pennsylvania is a women’s liberal arts school that was founded in 1885. Bryn Mawr was the first women’s university in the nation to offer graduate education through to a PhD. While the undergraduate program is open only to females, the school opened up the postgraduate program to males in 1931.

President Obama signed “The Medicare Access and CHIP Reauthorization Act” in April of 2015. Among other things, the bill calls for the removal of Social Security Numbers (SSNs) from Medicare cards in a move designed to protect cardholders from identity theft.

18. President who appointed two women to the Supreme Court : OBAMA

The riser is the vertical part of a step in a flight of stairs.

Black ice isn’t really black, but rather is transparent and allows the black color of the pavement below to be seen through it. Black ice is a notable hazard in that it forms in relatively dry conditions from moisture in the road surface itself. When that moisture freezes, it expands and creates an icy, transparent film.

Airbus is an aircraft manufacturer based in Blagnac, France just outside Toulouse. Airbus produces about half of the world’s jetliners. The company built the first fly-by-wire aircraft (the A320) and also builds the world’s largest airliner (the A380).

Béla Károlyi is a gymnastics coach from Romania who has lived in the US since 1981. Károlyi has coached both the US and Romanian national teams, with both winning Olympic gold.

The Tigers are the sports teams of Louisiana State University (LSU). They are officially known as the Fightin’ Tigers, and the school mascot is “Mike the Tiger”. The name comes from the days of the Civil War, when two Louisiana brigades earned the nickname the “Louisiana Tigers”. Given the French/Cajun history of Louisiana, the LSU fans use the cheer “Geaux Tigers” instead of “Go Tigers”.