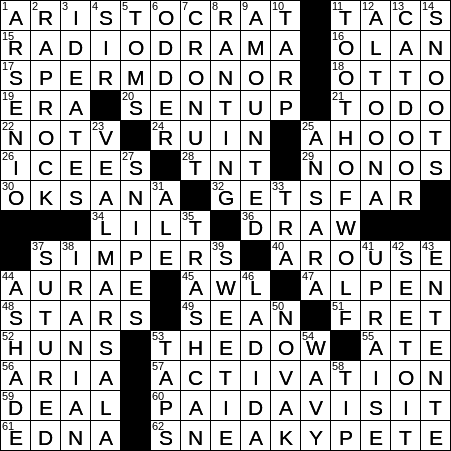 An aristocracy is a state in which the power of government is placed in the hands of a privileged few. The term “aristocracy” ultimately comes from the Greek “aristos” meaning “excellent” and “kratos” meaning “rule”. In Ancient Greece, aristocracy was compared favorably with a monarchy, the idea being that the best-qualified few would serve better that an individual who inherited power. More recently, particularly during the French Revolution, aristocracy has been compared unfavorably with democracy.

Tic Tacs aren’t American candies (as I always mistakenly believed). Tic Tacs are made by the Italian company Ferrero, and were introduced in 1969.

I think it’s so sad that the wonderful tradition of making and broadcasting radio drama has been all but lost in the US. Fortunately, the UK’s BBC still produces radio plays on a regular basis. They also rebroadcast many of the terrific American radio plays from the 1940s, and so you can still hear works that feature Hollywood stars like Frank Sinatra, Judy Garland, Orson Welles and Basil Rathbone.

The first really successful fertility clinic was the Barton Clinic in London, which was founded by British obstetrician Mary Barton. Barton pioneered Artificial Insemination by Donor, a protocol for use by couples unable to conceive a child due to male infertility. About 1,500 babies, nicknamed the “Barton Brood”, were born as the result of the program. It is estimated that Mary Barton’s husband, Austrian psychologist Bertold Wiesner, was the biological father to about 600 of the “Brood”.

Not only was Otto Graham a professional football player for the Cleveland Browns, but he also played professional basketball for the Rochester Royals (now the Sacramento Kings).

Oksana Baiul is a Ukrainian figure skater, and the 1994 Olympic champion. Baiul had a rough start to her life as her father deserted her and her mother when she was just two years old, and then her mother died when she was thirteen. Her grandparents had died earlier so she was left as an orphan, sleeping on a cot in her hometown ice rink.

Kristi Yamaguchi is a figure skater, an Olympic champion in 1992. She is quite the dancer too, having won “Dancing with the Stars” in 2008. Yamaguchi started skating and taking ballet as a young child as physical therapy, as she had club feet …

Lilting is a form of singing heard in Ireland and Scotland that sort of resembles scat singing. The singer uses no words, but produces melodious sounds from the mouth.

Alpen is a British brand of muesli. I grew up on Alpen in Ireland …

A constellation is a collection of stars that forms the imaginary outline of a creature or god from mythology, or perhaps an object. There are 48 traditional Western constellations, and these were all defined in Claudius Ptolemy’s 2nd-century treatise called the “Almagest”. Today, there are 88 modern constellations with contiguous boundaries that together cover the entire night sky.

Sean Lennon is the only child of John Lennon and Yoko Ono, and godson of Elton John. Sean is a musician and composer, and has a band called the Ghost of a Saber Tooth Tiger.

53 It includes AAPL and MSFT : THE DOW

Dow Jones & Company was founded as a publishing house in 1882 by three newspaper reporters, Charles Dow, Edward Jones and Charles Bergstresser. Today, the company’s most famous publication has to be “The Wall Street Journal”. In 1884, Charles Dow started reporting the average dollar value of the stock of eleven companies, an index which spawned a whole host of metrics that carry the Dow Jones name to this day. The most famous of these metrics is the Dow Jones Industrial Average (DJIA), also known as the “Dow 30” or simply the “Dow”.

The NASDAQ ticker symbol for Apple is AAPL, and for Microsoft is MSFT.

Beverly Sills was an operatic soprano from Brooklyn, New York. Sills retired from singing in 1980 to become the general manager of the New York City Opera. She later became Chairman of the Lincoln Center and the Metropolitan opera.

It’s a great deal, a bargain, a steal.

In “the Simpsons” television show, Bart Simpson’s teacher is one Edna Krabappel. Edna marries Ned Flanders, who is the next-door neighbor to the Simpson family.

Giovanni Ribisi is the actor who played Frank Jr., Phoebe’s brother on “Friends”. He also had a supporting role in the wonderful movie “Saving Private Ryan”, and a starring spot in “Lost in Translation”. More recently, Ribisi played the title role in the excellent crime drama “Sneaky Pete”.

“Sneaky Pete” is a really clever crime drama series about a con man who adopts the identity of his cellmate “Pete”, as the former gets out of prison. The title character is played by Giovanni Ribisi. The show was co-created by Bryan Cranston of “Breaking Bad” fame.

Limp Bizkit is described as a nu metal band, with “nu metal” being a subgenre of “heavy metal”. Limp Bizkit has been around since 1994, and that’s all I know …

A cronut is a pastry that resembles a doughnut but is made using a croissant-like dough. It is filled with cream and deep-fried in grapeseed oil. It is a relatively new pastry, having been invented by New York bakery owner Dominique Ansel in 2013. The term “cronut” is a portmanteau of “croissant” and “doughnut”.

The Three Witches in William Shakespeare’s “Macbeth” cook up an ugly brew in their cauldron:

“Snoot” is a variant of “snout” and is a word that originated in Scotland. The idea is that someone who is snooty, or “snouty”, tends to look down his or her nose at the rest of the world.

A trattoria is an Italian restaurant. In Italian, a “trattore” is the keeper of said eating house.

Ali Khamenei became the 2nd Supreme Leader of Iran in 1989, after serving for almost eight years as the 3rd President of Iran.

Mohammad Khatami was President of Iran from 1987 until 2005.

An entente cordiale (sometimes just “entente”) is a friendly understanding, usually between two nations. The term, which translates from French as “cordial agreement”, was first used to describe a set of agreements between the UK and France that were put in place 1904.

B. J. Novak is an actor and write who is perhaps best known for playing Ryan Howard on “The Office”, a sitcom for which he wrote and also served as one of the executive producers.