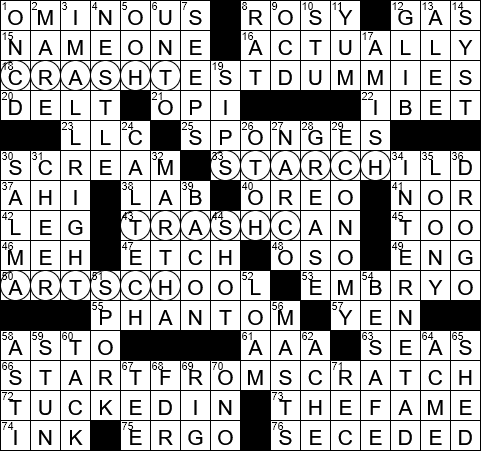 Themed answers each START with the letters SCRATCH rearranged:

In folklore, a starchild is young person believed to have fallen from the stars.

Kobe is a city on the island of Honshu in Japan. Here is North America, the city of Kobe is perhaps most famous for its beef. And yes, basketball star Kobe Bryant was named after that very same beef.

Kobe Bryant played basketball for the LA Lakers. Bryant got his given name from a menu, would you believe? His parents were in a Japanese restaurant and liked the name of “Kobe” beef, the beef from around the city of Kobe on the island of Honshu in Japan.

Duracell is a brand of batteries made today by Procter & Gamble. “Duracell” is a portmanteau of “durable” and “cell”.

Octopodes and squid have the ability to release dark pigment into the water as a means of escape. The dark pigment is called cephalopod ink (the squid and octopus belong to the class cephalopoda). The dark color is created by melanin, the same substance that acts as a pigment in human skin.

Salma Hayek is a Mexican actress. Hayek was the first Mexican national to be nominated for a Best Actress Oscar, earning that nomination with her portrayal of artist Frida Kahlo in the 2002 movie “Frida”.

Something described as loony is insane, crazy. “Loony” is short for “lunatic”, an adjective that is now considered offensive. The term arose in the late 1400s when it meant “affected with periodic insanity”, insanity attacks brought on by the cycles of the moon. “Lunatic” comes from the Latin “luna” meaning “moon”.

Since the days of President George Washington, there was an informal tradition that a US President could hold office for two terms, but would not run for a third. Franklin D. Roosevelt was the only president to break with this tradition. President Roosevelt was elected to office four times, and died a few months after starting his fourth term. It was President Roosevelt’s decision to ignore the term limit tradition that led to the adoption of the Twenty-Second Amendment of the Constitution, which provides that “no person shall be elected to the office of President more than twice”.