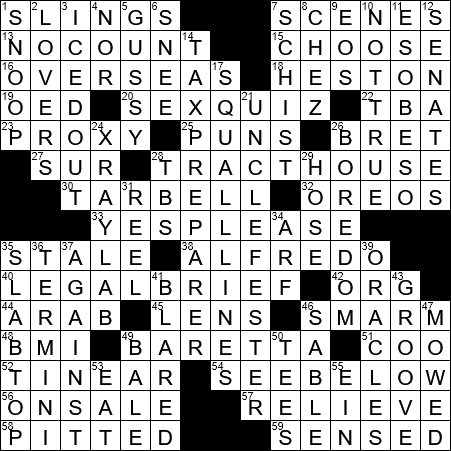 As well as having a fine career as an actor, Charlton Heston was a noted political activist. In the fifties he was very much a progressive and left-leaning in his political views. He was one of few in Hollywood to speak out against racism and support the Civil Rights Movement. Later in his life Heston became more associated with the conservative right, and was president of the National Rifle Association.

The term “webspace” can have several meanings depending on context. At the most basic level, webspace is disk space allocated on a server for a person or an entity to store web pages that can be accessed using the Internet. For example, I pay a web hosting service to allocate web space for me that I use to publish my two crossword blogs (LAXCrossword.com and NYXCrossword.com).

BuzzFeed is an Internet media company that was founded in 2006 in New York City. Buzzfeed’s original focus was the publication of online quizzes and pop culture articles. The company branched into serious journalism in 2011 with the launch of the “Buzzfeed News” website.

25. “Tequila mockingbird” and “absinthe of malice,” for two : PUNS

“Maverick” is a TV series set in the Wild West and starring James Garner as Bret Maverick. Midway through the first series, Bret was given a brother called Bart, who was played by Jack Kelly. Once the brother’s character was introduced, Bart and Bret alternated as the lead character in each weekly episode. Both Mavericks were expert poker players who got themselves in and out of all sorts of trouble. After the third season, James Garner left the show and was replaced by actor Roger Moore who played a Maverick cousin called Beau. Still later, actor Robert Colbert was introduced as a third brother called Brent Maverick.

30. “The History of the Standard Oil Company” author : TARBELL

Ida Tarbell was a teacher and what we would call today an “investigative journalist”, although back in her day she was known as a “muckraker”. Her most famous work is her 1904 book “The History of the Standard Oil Company”. It is an exposé that is credited with hastening the breakup of John D. Rockefeller’s Standard Oil in 1911.

46. Part of some salesmen’s deliveries : SMARM

The term “smarm”, meaning insincere flattery, comes from a colloquial word “smalm” meaning to smear the hair with some sort of styling product.

“Baretta” is a detective show that originally aired from 1975 to 1978. Robert Blake played the title role of Tony Baretta, a New Jersey cop who lived in an apartment with his pet cockatoo named Fred. Famously, Blake ended up on the wrong side of the law in his real life. He was tried and acquitted of the 2001 murder of his wife, but found liable for her wrongful death in a 2005 civil suit.

57. Come out of the bullpen : RELIEVE

To gussy up is to dress showily. The term “gussy” was a slang term that was used for an overly-dressed person.

“Snick or snee” is the name given to cut and thrust while fighting with a knife. The phrase is rooted in a pair of Dutch words. The expression gave its name to “snickersnee” (sometimes just “snee”), a term describing a light sword-like knife.

Schists are a family of metamorphic rocks. The name “schist” comes from the Greek word “schízein” meaning “to split”, and is a reference to the ease at which schists can be cleaved. Back in the mid-1700s, miners tended to use the terms “slate”, “shale” and “schist” interchangeably.

“Chez” is a French term meaning “at the house of”, which comes from the Latin word “casa” meaning “cottage” or “hut”.

Our word “senate” comes from the Latin for such a body, namely “senatus”. In turn, “senatus” is derived from “senex” meaning “old man”, reflecting the original Roman senate’s makeup as a council of “elders”.

A squall line is a line of thunderstorms that sometimes precedes a cold front.

“Angie Tribeca” is a sitcom created by Steve Carell and his wife Nancy Walls Carell. The title character is an LAPD police detective played by actress Rashida Jones. I hear that the show is pretty goofy, but well worth watching

In Ancient Greece and Rome, an oracle was someone believed inspired by the gods to give wise counsel. The word “oracle” derives from the Latin “orare” meaning “to speak”, which is the same root for our word “orator”. One of the most important oracles of Ancient Greece was the priestess to Apollo at Delphi.