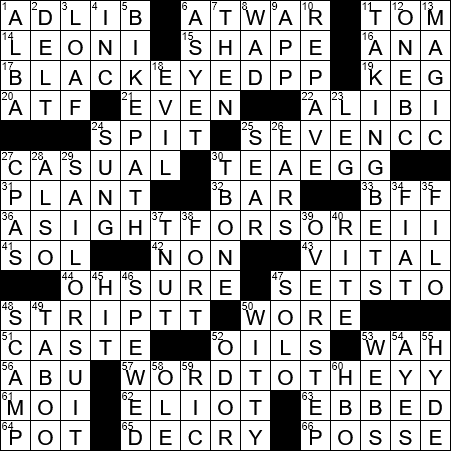 Theme: Solved with EE, So We Hear

“Ad libitum” is a Latin phrase meaning “at one’s pleasure”. In common usage the phrase is usually shortened to “ad lib”. On the stage the concept of an ad lib is very familiar.

Téa Leoni is an American actress. One of Leoni’s early parts was in the great film “A League of Their Own” (a minor role, Racine at first base). She also played the fiancée of Sam Malone from “Cheers” on the spin-off sitcom “Frasier”. A leading role on the big screen was opposite Adam Sandler in “Spanglish”. My favorite of her more prominent movie roles was as Jane in “Fun with Dick and Jane”. Leoni is now playing the title role in the drama series “Madam Secretary”, a show that I really enjoy …

The 2005 comedy film “Fun with Dick and Jane” stars Jim Carrey and Téa Leoni in the title roles. It is a remake of the 1977 movie of the same name starring George Segal and Jane Fonda as Dick and Jane. The film centers on a middle-class couple who get into financial difficulties and who turn to robbery to make ends meet.

Sue Grafton writes detective novels, and her “alphabet series” features the private investigator Kinsey Millhone. She started off with “A Is for Alibi” in 1982 and is working her way through the alphabet. Apparently Ms. Grafton has already decided that “Z is for Zero” will be the final title in the series. What a clever naming system!

The Chinese dish known as a tea egg is made by boiling an egg in water, cracking the shell, and then reboiling the egg in tea or a spiced sauce. Often sold as a snack food, the tea egg is also called a “marble egg”, referring to the marbled appearance of the cracked shell after boiling in a colored liquid.

The animated feature “Monsters, Inc.” was released in 2001, and was Pixar’s fourth full-length movie. It’s about cute monsters, and that’s all I know other than that the voice cast included the likes of John Goodman, Billy Crystal and Steve Buscemi.

The Bravo is a small 3-door car made by Fiat from 1995 through 2001. The 5-door version of the same vehicle is sold as a Brava. The Fiat Bravo was reintroduced in 2007 and manufactured through 2014. The newer Bravo was a 5-door vehicle. A little confusing …

We might call a little imp a rapscallion, an evolution from “rascallion”, which in turn comes from “rascal”.

The wrestler Ric Flair’s real name is Richard Fliehr. Perhaps following the lead of his compatriot Jesse Ventura, Flair explored the possibility of running for governor of the state of North Carolina.

I haven’t seen the HBO series “Entourage”, but will have to take a look one day as I am a huge fan of HBO productions. “Entourage” is the story of a young movie star from New York City learning about life in Los Angeles. The show is co-produced by the actor Mark Wahlberg and so the storyline is somewhat autobiographical, based on a few of Wahlberg’s own experiences.

38. One might be made of sheets and pillows : FORT