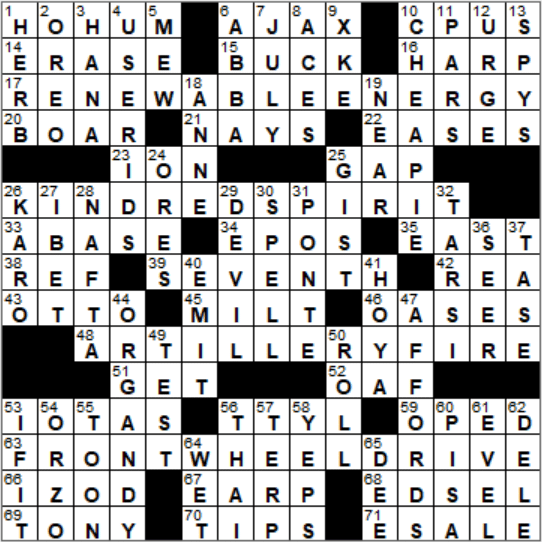 Today’s Theme (according to Bill): Get Up and Go Last

Themed answers are common phrases in which the last word are synonyms, synonyms of “get-up-and-go”:

“Epos” is the Greek word for a story or a poem. We have absorbed the term into English with the same meaning. We also use it in English to mean “epic”, i.e. a long narrative poetic work featuring heroic deeds and ventures.

39. Inning with a stretch : SEVENTH

Milt Jackson was a jazz vibraphonist. A vibraphone is a similar to a xylophone, but it has aluminum instead of wooden bars. Vibraphones are most commonly seen as part of jazz ensembles. Milt Jackson started his career as part of the band playing with Dizzy Gillespie.

The legendary Western gunfighter and lawman Wyatt Earp has been portrayed on the big and small screen many, many times. Kevin Costner played the title role in 1994’s “Wyatt Earp”, and Val Kilmer played Earp in 2012’s “The First Ride of Wyatt Earp”. Joel McCrea had the part in 1955’s “Wichita”, and Kurt Russell was Earp in 1993’s “Tombstone”. James Garner played Earp twice, in 1967’s “Hour of the Gun” and 1988’s “Sunset”.

The actor Kurt Russell’s career started when he was a child playing a lead role in the TV Western series “The Travels of Jaimie McPheeters” in the sixties. Russell met actress Goldie Hawn on the set of the 1984 film “Swing Shift”, and the two have been in a committed relationship ever since.

Kevin Costner attributes some of his motivation to pursue an acting career to the great Welsh actor, Richard Burton. Back when Costner was taking acting classes, and was undecided about whether to continue chasing his dream, he ran into Burton on a flight from Puerto Vallarta. Burton agreed to chat with him for a little while, and so Costner was able to ask him if acting meant tolerating the kind of personal drama that had plagued Burton’s own life. Burton told him, “You have green eyes. I have green eyes. I think you’ll be fine”.

Tony Bennett launched his singing career after returning from service in Europe with the US Army during WWII. Bennett was at the height of his success in the 1950s and early 1960s, but his popularity then waned in 1970s and 1980s. During that time, Bennett struggled with drug addiction and came close to bankruptcy. Largely due to the support of his son Danny, Bennett turned his life around, and found a new audience of younger people in the 1990s. He hasn’t looked back since.

Irving Berlin wrote the song “Cheek to Cheek” for the 1935 movie “To Hat” starring Fred Astaire and Ginger Rogers.

Heaven, I’m in heaven,
And my heart beats so that I can hardly speak
And I seem to find the happiness I seek
When we’re out together dancing, cheek to cheek

Double Delight Oreo cookies were introduced in 1987. They differ from regular Oreos in that they have two fillings, such peanut butter and chocolate, or coffee and cream.

Hana Mandlikova is a former professional tennis star from Czechoslovakia. Mandlikova won four Grand Slam titles and then retired in 1990, at the ripe old age of 28.

We knew them as E-type Jags in my part of the world growing up, but they were marketed over in the US as the Jaguar XK-E line. The XK-E was manufactured from 1961 to 1974.

Karo is a brand of corn syrup. It is an industrially-manufactured sweetener derived from corn.

The Ponte Vecchio is the oldest bridge that spans the Arno River in Florence, Italy. The bridge dates back to medieval times, and indeed the name “Ponte Vecchio” translates as “Old Bridge”. Famously, there are two rows of shops built on either side of the roadway crossing the bridge.

Organdy is an extremely sheer, thin, crisp cotton cloth that is used for making blouses and dresses, as well as curtains and trimmings.

Remember the catchphrase made famous by the cartoon character Snagglepuss, “Heavens to Murgatroyd!”? Snagglepuss stole that line from a 1944 movie called, “Meet the People” in which it was first uttered by none other than Bert Lahr, the actor who played the cowardly lion in “The Wizard of Oz”.