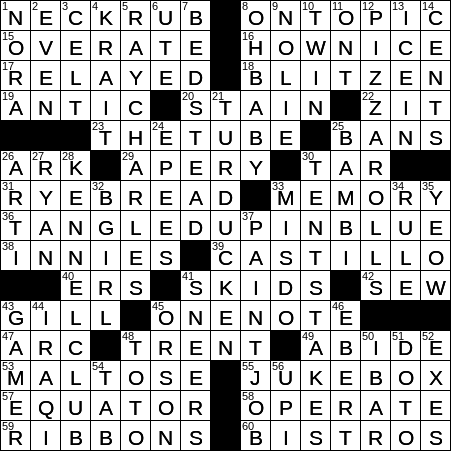 18. One pulling his weight around Christmas : BLITZEN

The Proactiv range of skincare products were introduced in 1995 by two dermatologists who met up with each other while studying at Stanford. Proactiv is market to people suffering with acne. There are quite a few folks who complain about the direct marketing approach to sales used for the products. Customers are “members” of a club, and the products keep coming until a subscription is canceled.

The official name “London Underground” is a little deceptive, as over half of the track system-wide is actually “over ground”, with the underground sections reserved for the central areas. It is the oldest subway system in the world, having opened in 1863. It was also the first system to use electric rolling stock, in 1890. “The Tube”, as it is known by Londoners, isn’t the longest subway system in the world though. That honor belongs to the Shanghai Metro. My personal favorite part of the Tube is the Tube map! It is a marvel of design …

Grizabella is a character in T. S. Eliot’s “Old Possum’s Book of Practical Cats”. In the musical ”Cats” that is adapted from the book, Grizabella is the character who sings the show-stopping song “Memory”.

36. Single from Dylan’s “Blood on the Tracks” : TANGLED UP IN BLUE

“Tangled Up in Blue” is a Bob Dylan song that he released in 1975. Apparently, Dylan once revealed that he wrote the song after spending much of a weekend listening to Joni Mitchell’s 1971 album “Blue”. I guess that would make sense given the title of the Dylan song …

The Castillo del Morro is a citadel in San Juan, Puerto Rico that dates back to the 16th century. It was built by the Spanish to protect the port city by guarding the entrance to San Juan Bay. The American military occupied El Morro starting in 1898, after Puerto Rico was ceded to the US at the end of the Spanish-American War. The US Army handed the facility over to civilian control in 1961, and it is now a National Park, and indeed a UNESCO World Heritage Site.

Vince Gill is a country music singer-songwriter. Gill has been honored with more Grammy Awards than any other male country singer.

55. Where old records may be kept : JUKEBOX

“Brothers & Sisters” is a TV drama that originally aired from 2006 until 2011. It tells the story of a wealthy family as it deals with the death of the patriarch, who founded the family business. Apparently, the show is loosely based on a British series called “The Brothers” that aired in the 1970s.

The Celts were a very broad group of people across Europe, linked by common languages. The Celts were largely absorbed by other cultures, although a relatively modern revival of the “Celtic identity” is alive and well in the British Isles. Such Celtic peoples today are mainly found in Ireland, Scotland, Wales and Brittany in France.

Kraits are venomous, nocturnal snakes that are native to the Indian Subcontinent and Southeast Asia.

5. Singer ranked #10 on Rolling Stone’s list of the 100 Greatest Artists of All Time : RAY CHARLES

Ray Charles came up with his stage name by dropping the family name from his real moniker “Ray Charles Robinson”. His life was a wild ride, well represented in the excellent biopic called “Ray” released in 2004 and starring Jamie Foxx in the title role. Ray Charles was married twice and fathered 12 children with nine different women. As I said, a wild ride …

Beautiful Toronto, Ontario is the largest city in Canada, and the fourth most populous city in North America (after Mexico City, New York and Los Angeles).

The original 1-cent coin was introduced in the US in 1793 and was made of 100% copper, giving rise to the nickname “copper” for a 1-cent coin. The composition varied over time, and was 100% bronze up to the 1940s. During WWII there was a shortage of copper to make bronze, so the US Mint switched to zinc-coated steel for production of one-cent coins in 1943. The “steelie” is the only coin ever issued by the US mint that can be picked up by a magnet. Today’s one-cent coin is comprised mainly of zinc.

The 1942 Disney classic “Bambi” is based on a book written by Felix Salten called “Bambi, A Life in the Woods”. There is a documented phenomenon known as the Bambi Effect, whereby people become more interested in animal rights after having watched the scene where Bambi’s mother is shot by hunters.

Ryan Reynolds is an actor from Vancouver who is best known these days for playing the title character in the “Deadpool” superhero films. Named “People” magazine’s Sexiest Man Alive in 2010, Ryan has had some high-profile relationships. He was engaged to singer Alanis Morissette for a couple of years, married to actress Scarlett Johansson (again for a couple of years), and is now married to actress Blake Lively whom he met on the set of “Green Lantern”.

“Deadpool” is a 2016 superhero film, the eighth of the “X-Men” series of movies. The title character is played by Ryan Reynolds.

B-girl is short for “bar girl”, a young lady employed by a tavern to encourage the (male, presumably) patrons to spend more money on drinks.

The Xbox line of video game consoles is made by Microsoft. The original Xbox platform was followed by Xbox 360 and more recently by Xbox One. Microsoft’s Xbox competes directly with Sony’s PlayStation and Nintendo’s Wii.

Kirkuk is a city in northern Iraq, in the Kurdish region of the country.

“The Magnificent Ambersons” is a 1942 film that is based on a 1918 novel by Booth Tarkington. The film is a little controversial in that RKO, the studio that made the film, cut a substantial amount of footage and reshot a happier ending, against the wishes of producer and director Orson Welles. The film tells the story of a wealthy Indianapolis family whose fortune changes with the arrival of the automobile age.