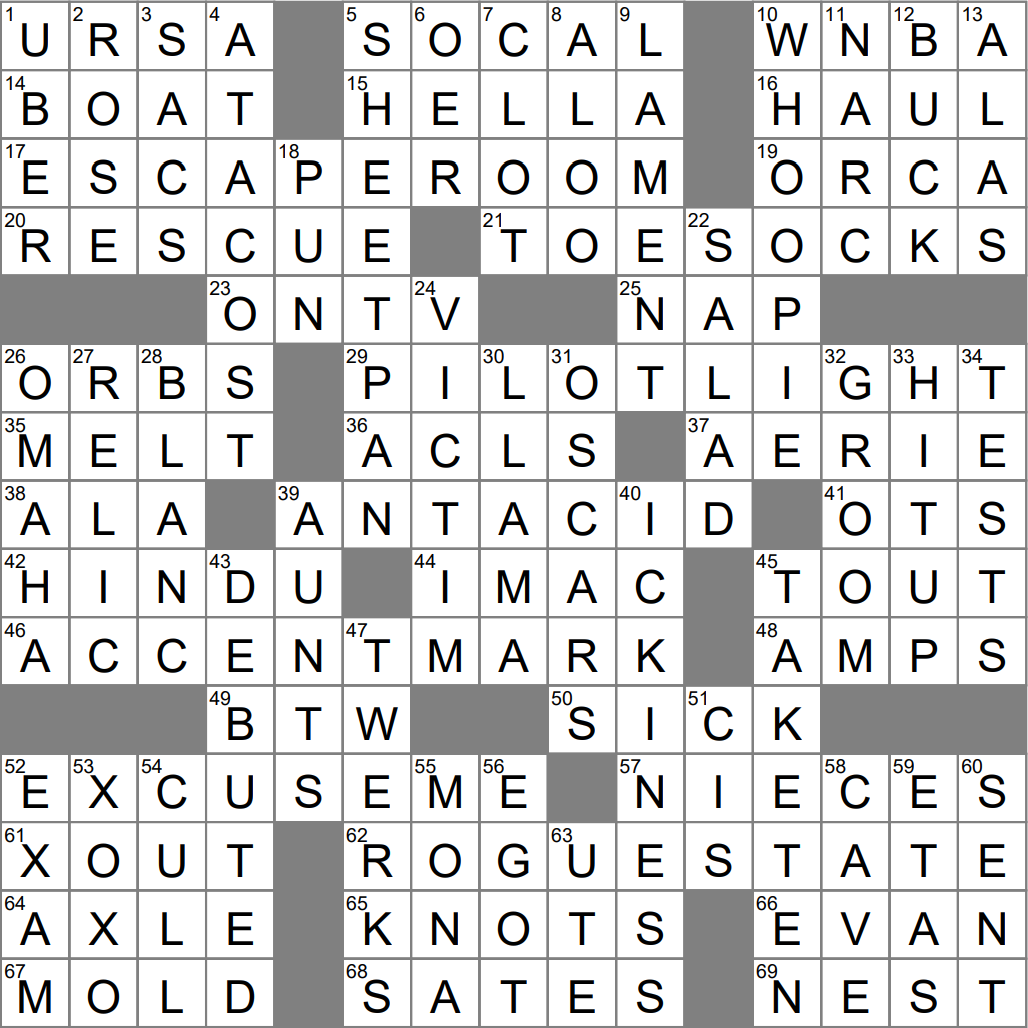 Today’s Theme (according to Bill): Start the Car

Themed answers are common phrases, reinterpreted by referencing a model of car at the start of each answer:

10 Org. that includes the Sun and the Sky : WNBA

Swag is loot, stolen property, and a term that started out as criminal slang in England in the 1830s. “Swag” is also the name given to the promotional freebies available at some events. That said, there’s an urban myth that the promotional version of “swag” is an acronym standing for “stuff we all get”.

The Ford Escape is an SUV that was developed jointly with Mazda and introduced in the 2001 model year. The Mazda version of the same vehicle is known as the Tribute.

19 Marine mammal with the same colors as an Oreo : ORCA

The eight planets of our solar system can be sorted into two categories. Mercury, Venus, Earth and Mars are “terrestrials” as they are largely composed of rock. Jupiter, Saturn, Uranus and Neptune are “gas giants”, as they are largely composed of gaseous material. Uranus and Neptune can be called “ice giants”, a subcategory of gas giants. Ice giants have a lower mass than other gas giants, with very little hydrogen and helium in their atmospheres and a higher proportion of rock and ice.

The Honda Pilot is a mid-size crossover SUV that was introduced in 2002. The luxury version of the vehicle is sold as the Acura MDX.

An aerie (sometimes “eyrie”) is an eagle’s nest, and a young eagle is an eaglet.The term “aerie” can also more generally describe any bird’s nest that is located on a cliff or a mountaintop.

In the Hindu tradition, the term “dharma” describes the laws of the natural universe. The observance of those laws enables one to be content and happy, and to avoid suffering.

“Retina Display” is a brand name used by Apple for screens that have a high enough pixel density so that individual pixels are not visible to the naked eye at normal viewing distance.

46 Starting line for a race exclusively for some Hyundais? : ACCENT MARK

The Accent is a subcompact car that was introduced by Hyundai in 1994.

The Rogue is a compact SUV that Nissan introduced in the 2008 model year. Outside of North America, the same vehicle is sold as the X-Trail.

Evan Bayh is the son of Birch Bayh, and like his father was US Senator for the state of Indiana. Prior to serving in the Senate, Evan Bayh was State Governor.

Aloo gobi is a very tasty vegetarian dish in Indian cuisine made from potatoes and cauliflower, flavored with traditional Indian spices. “Aloo” translates to “potato” and “gobi” to “cauliflower”.

A whoopie pie is sometimes referred to as a “BFO”, standing for Big Fat Oreo. The latter term is quite descriptive as a whoopie pie is made from two mound-shaped pieces of chocolate cake placed above and below a white creamy filling. There is some evidence that the confection originated with the Pennsylvania Amish. Apparently, when farmers found the pie in their lunch bags they shouted “whoopie!”, hence the name.

Buck Showalter serves as the manager of the New York Yankees, the Arizona Diamondbacks, the Texas Rangers and the Baltimore Orioles baseball teams. Showalter has won the American League’s Manager of the Year award three times.

Omaha is the largest city in the state of Nebraska. It is located on the Missouri River, about 10 miles north of the mouth of the Platte River. When Nebraska was still a territory Omaha was its capital, but when Nebraska achieved statehood the capital was moved to the city of Lincoln.

At 2,341 miles, the Missouri is the longest river in North America. Rising in Montana in the Rocky Mountains, it flows into the Mississippi at St. Louis. The Mississippi-Missouri river system is the fourth largest on the planet.

27 Remnant of the past : RELIC

A relic is something that has survived from the past, reminding us of that past. In the world of religion, a relic is an object revered due to its association with a saint or martyr.

Sauvignon blanc is a variety of grape used in wine-making. It is an old grape variety, and is indigenous to South West France. The name “sauvignon” probably comes from the French word “sauvage” meaning “wild”, and probably refers to its origins as a grape growing wild. The term “Fumé Blanc” may be used in California for a sauvignon blanc wine, but that’s just marketing.

The llama is a camelid mammal very much associated with the Andean cultures. Despite the association with South America, it is thought that the ancestors of the modern llama migrated south from the Great Plains of North America about 40 million years ago.

Twerking is a dancing move in which someone (usually a woman) shakes her hips up and down causing a lot of “wobbling”. It’s possible that “twerk” is a portmanteau of “twist” and “jerk”. The term may have been coined back in the early 2000s with the song “Whistle While You Twurk” released by the Ying Yang Twins. Twerking became a real phenomenon in 2013 when Miley Cyrus posted a video of herself twerking in a unicorn suit to the 2011 song “Wop” by J. Dash. That video went viral on YouTube, amassing over 4 million views in no time at all.

A proctor is a supervisor, and especially a person overseeing a school examination or a dormitory. The word “proctor” originated in the late 1500s, and is a contraction of the word “procurator”, the name given to an official agent of a church.

To cull is to pick out the best, get rid of the rejects.

The acronym “EGOT” stands for “Emmy, Grammy, Oscar, Tony”, and is a reference to performers who have won all four awards.

One of the more celebrated Shoshone people was Sacagawea, the woman who traveled thousands of miles with the Lewis and Clark Expedition, serving as a guide and interpreter.