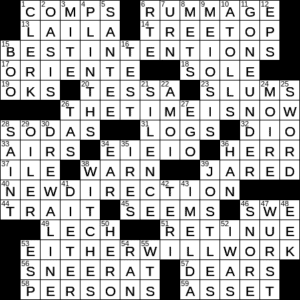 Themed answers each include the vowels E, I, E, I and O, and only those vowels, in that order:

The verb “to rummage”, meaning “to search thoroughly”, has an interesting history. Back in the 16th century, a “rummage” was the act of arranging cargo in a ship. In the early 17th century, the verb “to rummage” was introduced, originally meaning to search thoroughly (the hold of a ship). It should be noted that rummaging usually involves moving things around. The first “rummage sales” were used to sell off unclaimed goods at docks. Over time, rummage sales became opportunities to dispose of unwanted items, usually in aid of a charity.

“Rock-a-Bye Baby” is a lullaby, the history of which is much debated. Some say it originated in England, and others claim that it was the first poem that was written on American soil.

In Spanish, the sun rises in the “oriente” (east).

Tessa Virtue is a Canadian ice dancer who won the 2010 and 2018 Olympic gold along with her partner Scott Moir. Virtue and Moir have been skating together since 1997, when they were seven and nine years old respectively. That makes them the longest-standing Canadian ice dance team in history.

36 Monsieur across the border : HERR

Quarterback Jared Goff was selected by the LA Rams as the first overall pick in the 2016 NFL draft. Jared is the son of former Major League Baseball player Jerry Goff.

Our contemporary word “clerk” described a priest or ordained minister back in the 13th century, and so is related to our term “clerical”. So, our use of “clerk” to describe an office worker arose in the days when it was only the clergy who could read and write.

A mite is a small amount, as in “The Widow’s Mite”, a story from the Bible.

A plinth is a block on which something is placed, especially a column. The Greek word “plinthos” means “squared stone”.

South Carolina’s Santee River was named by English settlers for the Santee tribe that lived along its banks. The Santee River was dammed in the late 1930s and early 1940s to form Lake Marion reservoir as part of a WPA project.

8 Team whose mascot’s head is a ball : METS

Mr. Met is the mascot of the New York Mets. He is a guy with a large baseball as a head. There’s also a Mrs. Met, a mascot who was previously known as Lady Met.

A gamete is a reproductive cell that has half the full complement of genes needed to make a normal cell. In sexual reproduction, it takes two gametes, one from each parent, to fuse into one cell which then develops into a new organism. The female gamete is the ovum, and the male the sperm.

An atoll is a coral island that is shaped in a ring that encloses a lagoon. There is still some debate as to how an atoll forms, but a theory proposed by Charles Darwin while on his famous voyage aboard HMS Beagle still holds sway. Basically an atoll was once a volcanic island that had subsided and fallen into the sea. The coastline of the island is home to coral growth which persists even as the island continues to subside inside the circling coral reef.

Excalibur is the legendary sword of the legendary King Arthur of Great Britain. In some accounts, Arthur was given the sword by the Lady of the Lake. There is sometimes confusion about the origin of Excalibur, as Arthur famously is said to have pulled a sword from a stone, hence proving him to be a true king. The Sword in the Stone is a different sword, and not Excalibur.

42 Polo usually not on horseback : TERI

Ferdinand Marcos served as President of the Philippines from 1965 until 1986, when he was forced to flee the country in the face of a popular revolt. Marcos, and his infamous wife Imelda, were known for their excesses and corruption. Ferdinand Marcos died in exile in Honolulu in 1989.