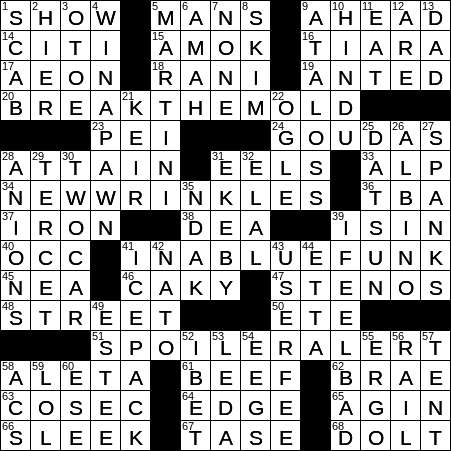 Themed answers each end with something that can ALERT us to SPOILAGE:

The idiom “beauty is in the eye of the beholder” is used to point out that beauty is subjective. Although the phrase shows up in different forms from as early as the 3rd century BCE, the first known use of the version we hear today is attributed to Irish novelist Margaret Wolfe Hungerford. She uses these words in her 1878 novel “Molly Bawn”:

It’s true that beauty is in the eye of the beholder. I haven’t found any of Mary’s boyfriends attractive, which is a good thing I guess!

41 *Depressed, colorfully : IN A BLUE FUNK

The city of Lyon in France, is also known as “Lyons” in English. Lyon is the second-largest metropolitan area in the country, after Paris. It is located just to the north of the confluence of the Rhône and Saône Rivers.

2 Yesterday, on the French Riviera : HIER

The Côte d’Azur is on the Mediterranean coast of France and stretches from Saint-Tropez in the west and to the Italian border in the east. In English, we often refer to the area as “the French Riviera”. It’s a little crowded for me (okay, “expensive”), especially in the summer.

4 Capture the first piece in chess, typically : WIN A PAWN

Why have a vodka martini shaken and not stirred (as does James Bond, 007)? Well, for one thing the shaken drink tends to be colder. And with more melted ice in the drink, it isn’t as strong. These are my personal observations. No need to write in …

Diwali is a popular Hindu festival. It is a “festival of lights”, a celebration of the victory of light over darkness, good over evil, and knowledge over ignorance. Diwali is observed annually over five days at the conclusion of the summer harvest, and when there is a new moon.

The 2006 drama film “We Are Marshall” tells the true story of a 1970 plane crash that killed 37 Marshall University football players, as well as many of the team’s support staff.

Keir Dullea is an actor best known for portraying David Bowman, the astronaut who is the protagonist in the 1968 film “2001: A Space Odyssey”. Dullea also appears as astronaut Bowman in the 1984 sequel “2010: The Year We Make Contact”.

29 Half a sestet, in an Italian sonnet : TERCET

Fargo, North Dakota is the biggest city in the state. The original name for the city was Centralia, when it was a stopping point for steamboats that traveled the Red River in the late 19th century. The town really grew with the arrival of the Northern Pacific Railway, so the name “Fargo” was adopted in honor of one of the railroad company’s directors, William Fargo (of Wells Fargo Express fame).

53 Mother of Castor and Pollux : LEDA