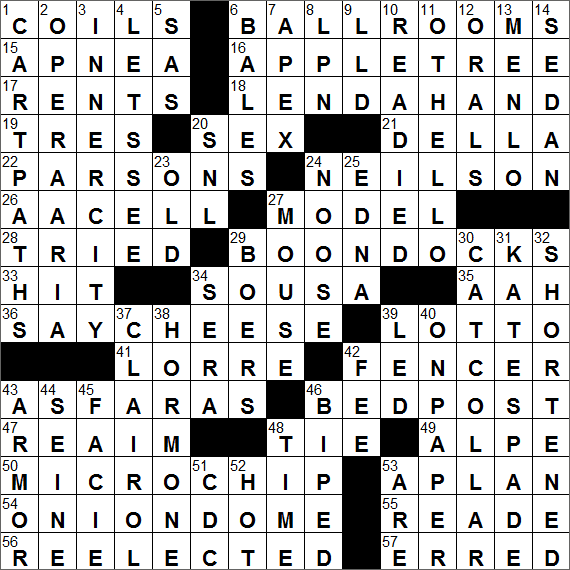 That would be like a snake coiled, ready to strike.

Back in 1871, Pearl Tobacco featured an image of a naked maiden on the outer packaging and in print advertisements. Apparently, this is the earliest known use of sex appeal in advertising.

Della Duck is the twin sister of Donald Duck, and mother of Huey, Dewey and Louie.

Roger Neilson was former NHL coach from Canada, who coached several teams both north and south of the US-Canada border. One of Neilson legacies was the introduction of videotape to analyze strategies and tactics used by other teams. As a result, he was sometimes known as “Captain Video”.

A paragon is an model of excellence, a peerless example. Ultimately the term derives from the Greek “para-” meaning “on the side” and “akone” meaning “whetstone”. This derivation comes from the ancient practice of using a touchstone to test gold for its level of purity by drawing a line on the stone with the gold and comparing the resulting mark with samples of known purity.

“Boondocks” is a term used in North America for a remote, usually rural area. Often the term is used derogatively, implying that a remote location is unsophisticated. “Boondocks” was first used by American soldiers stationed in the Philippines in the early 1900s. The word evolved from the Tagalog “bundok” meaning “mountain”.

The search engine “Google” was originally called “BackRub” would you believe? The name was eventually changed to Google, an intentional misspelling of the word “googol”. A googol is a pretty big number, 10 to the power of 100. That would be the digit 1 followed by 100 zeros.

John Philip Sousa was a composer and conductor from Washington, D.C. Sousa was well known for his patriotic marches and earned himself the nickname “The American March King”. He served as a member of the US Marine Band from 1868 to 1875, and after leaving the Marines learned to conduct and compose. One of the Sousa compositions that is well-known around the world is called “The Liberty Bell”, a tune used as the musical theme for BBC Television’s “Monty Python’s Flying Circus”. Sousa also wrote “Semper Fidelis”, which is the official march of the US Marine Corps.

Originally “Lotto” was a type of card game, with “lotto” being the Italian for “a lot”. We’ve used “lotto” to mean a gambling game since the late 1700s.

Sydney Greenstreet was an English actor, most noted for his appearances in the movies “The Maltese Falcon” and “Casablanca” alongside Humphrey Bogart and Peter Lorre. Greenstreet was a portly gentleman and has been cited as partial inspiration for the Jabba the Hutt character in the “Star Wars” movie “Return of the Jedi”.

Fencing was introduced as an Olympic sport in 1896, at the first Games held in the modern era. There are three fencing events in the modern Olympics, distinguished by the weapon used:

Charles Reade was an English author who came to public attention with a two-act comedy play called “Masks and Faces”. Reade turned the play into a prose story in 1852 that he called “Peg Woffington”. Reade also wrote a historical novel called “The Cloister and the Hearth” about a married man who becomes a Dominican friar on hearing that his wife has died. Years later he discovers that his wife is in fact still living and a struggle develops between the man’s obligation to family and his obligation to the Roman Catholic Church.

Those would be cart paths on a golf course.

“Norma” is an opera written by Vincenzo Bellini, first performed in 1831. One aria from the work is “Casta diva”, which is one of the most popular arias of the 1800s.

Harvard College gave the school’s first LL.D (an honorary law degree) to General George Washington, doing so in April 1776, less than a month after the Continental Army had driven the British from Boston.

Menlo Park is a town in the San Francisco Bay Area. The town was built around land previously owned by two Irish immigrants. The pair called their property “Menlo Park”, naming it for Menlo in County Galway, which is where the Irishmen came from.

The Chevrolet Impala was first introduced in 1957, and you can still buy one today. “Impala” is the Zulu word for “gazelle”.

The term “oater” that is used for a western movie comes from the number of horses seen, as horses love oats!

Most of Logitech’s products are computer peripherals, such keyboards, mice, microphones and webcams. Logitech is a Swiss company, founded in 1981 by two Stanford graduates and a former Olivetti engineer.

Kate Spade fashion design house was founded as a supplier of handbags in 1993. The brand is named for founder Kate Brosnahan Spade. The equivalent male brand is called Jack Spade.

Blood serum is the clear, yellowish part of blood i.e. that part which is neither a blood cell or a clotting factor. Included in blood serum are antibodies, the proteins that are central to our immune system. Blood serum from animals that have immunity to some disease can be transferred to another individual, hence providing that second individual with some level of immunity. Blood serum used to pass on immunity can be called “antiserum”.

Clairol had been around since 1931 selling hair coloring products to salons, and then hit the big time with the introduction of a one-step hair coloring product for use at home. As famous as the product was the “does she … doesn’t she” advertising campaign. Six years after the launch of the campaign, 70% of women in the US were coloring their hair.

The city of Troyes is located on the River Seine just under 100 miles southeast of Paris. The popular board game called “Troyes” was released in 2010 and is named for the historic city.

Melun is suburb of Paris, located about 25 miles from the center of the city.

“Prima facie” is Latin for “first encounter” or “at first sight”. In the world of the law, a prima facie case is one in which the evidence is deemed to be sufficient for a judgment to be made unless the evidence is contested.

16…Source of some sauce..APPLE TREE

56…Got back to one’s office?..REELECTED