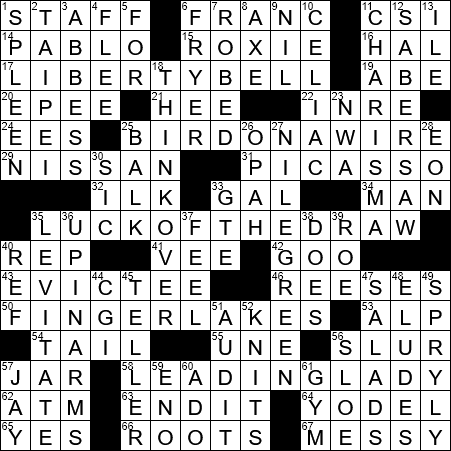 Themed answers LEAD off with a LADY:

Not only is the Swiss Franc legal tender in Switzerland, it is also the money used in Liechtenstein and the Italian exclave of Campione d’Italia.

Picasso’s Blue Period comprises works completed between 1901 and 1904. All his paintings in the era were basically monochromatic, using different shades of blue. HIs best-known work from the period is “The Old Guitarist”, which you can see at the Art Institute of Chicago.

In Arthur C. Clarke’s “Space Odyssey” (famously adapted for the big screen as “2001: A Space Odyssey”) the computer system that went rogue was called HAL 9000, or simply “HAL”. HAL stands for “Heuristically programmed ALgorithmic computer”. Even though, Clarke denied it, there’s a good argument that can be made that the acronym HAL is a veiled reference to IBM, the big player in the world of computing at the time of the novel’s publication (1968). The acronym HAL is just a one-letter shift from the initials “IBM”.

The Statue of Liberty was a gift from the people of France to the United States. It was designed by sculptor Frédéric Auguste Bartholdi and constructed in France by civil engineer Gustave Eiffel (of Eiffel Tower fame). The statue was disassembled, shipped to the US, and reassembled on its pedestal on Bedloe’s Island (now “Liberty Island). A ceremony of dedication was held in 1886. If you take a boat ride down the Seine in Paris you will probably see a one-third replica of Lady Liberty standing on a small island in the river, looking quite magnificent. That copy was given to the people of Paris by the city’s American community in 1889.

“Bird on a Wire” is a fun film released in 1990, starring Mel Gibson and Goldie Hawn. The movie’s title comes from the Leonard Cohen song “Bird on the Wire”.

The insect we know as a ladybug (also “ladybird”) has seven spots on its wing covers. These seven spots gave rise to the common name “ladybug”, as in the Middle Ages the insect was called the “beetle of Our Lady”. The spots were said to symbolize the Seven Joys and Seven Sorrows, events in the life of the Blessed Virgin Mary called out in the Roman Catholic tradition.

The quart, the unit of volume, is so called because it is one quarter of a gallon.

“The Odd Couple” is a play by the wonderfully talented Neil Simon that was first performed on Broadway, in 1965. This great play was adapted for the big screen in 1968, famously starring Jack Lemmon (as Felix Unger) and Walter Matthau (as Oscar Madison). The success of the play and the film gave rise to an excellent television sitcom that ran from 1970-1975, starring Tony Randall and Jack Klugman. In 1985, Neil Simon even went so far as to adapt the play for an all-female cast, renaming it “The Female Odd Couple”. I’d like to see that one …

1 Organ near the stomach : SPLEEN

10 Pertaining to the abdominal cavity : CELIAC

Our word “celiac” is used for things related to the abdomen. The term is derived from the Greek “koiliakos” meaning “pertaining to the bowels”.

To tell can mean to count, as in “telling one’s blessings” and “there are 16, all told”. This usage of the word “tell” gives us the term “bank teller”.