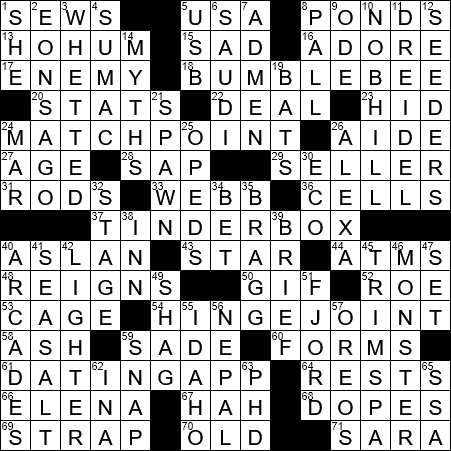 Themed answers each start with a DATING APP:

In the sport of soccer, the first Women’s World Cup took place in 1970 in Italy. Denmark emerged victorious, after beating the host team in the final.

Aaron Burr was the third vice-president of the US, and served under Thomas Jefferson from 1801 to 1805. In the final year of his term in office, Burr fought an illegal duel and killed his political rival Alexander Hamilton. Burr was charged with several crimes as a result, but those charges were eventually dropped. The Democratic-Republican Party had already decided not to nominate Burr as candidate for vice president to run alongside Jefferson in the 1804 election, largely because the relationship between Vice President Burr and President Jefferson was so poor. The subsequent fallout resulting from the killing of Alexander Hamilton effectively ended Burr’s political career.

Bumble is a dating app that was founded by Whitney Wolfe Herd, the co-founder of Tinder. Bumble has been described as a “feminist dating app”. Indeed, first contact in a potential heterosexual relationship can only be made by a female user.

Jack Webb played Sergeant Joe Friday on “Dragnet” on both TV and radio … and what a voice he had! Off the screen, Webb was a lover of jazz, and he played the cornet. It was within the world of jazz that he met and fell in love with Julie London, the famous singer with “the smoky voice”. The couple married and had two kids together.

40 Lion in “The Chronicles of Narnia” : ASLAN

In the C. S. Lewis series of books known as “The Chronicles of Narnia”, Aslan is the name of the lion character (as in the title “The Lion, the Witch and the Wardrobe”). “Aslan” is actually the Turkish word for lion. Anyone who has read the books will recognize the remarkable similarity between the story of Aslan and the story of Christ, including a sacrifice and resurrection.

Hinge is a dating app that was launched in 2012. Apparently, a key feature of the app is the use of Facebook friends to facilitate introductions to potential matches.

Nob Hill is a very elevated and central location in the city of San Francisco. Because of its views of the surrounding city and environs, Nob Hill became a desirable place to live for the wealthy in the 1800s. The area is still one of San Francisco’s most affluent neighborhoods and is home to upscale hotels as well as the magnificent Grace Cathedral. The name “Nob Hill” comes from the slang term for someone who is well-to-do, a “nob”.

A dreidel is a spinning top with four sides, often associated with the Jewish holiday of Hanukkah. Each of the four sides on a dreidel bears a letter from the Hebrew alphabet (nun, gimel, hei and shin). The four letters are the initials of the Hebrew phrase “Nes Gadol Hayah Sham” meaning “a great miracle happened there”. According to tradition, children would be taught Torah while hiding in caves away from the Greeks. When Greek soldiers approached, the children would hide their torah scrolls and play with their dreidels instead.

TrimSpa was a dietary supplement touted as an aid to weight loss. Its active ingredients were stimulants (like caffeine and ephedra). TrimSpa became quite famous when the manufacturers hired Anna Nicole Smith as spokesperson for the product. The company went bankrupt soon after the Federal Trade Commission issued fines for making false claims in advertising.

Anna Nicole Smith was a model and former Playmate of the Year. She hit the headlines in 1994 when she married 89-year-old billionaire J. Howard Marshall, who was over 60 years her senior. Marshall died 14 months later, and there followed a lengthy court battle over how much of Marshall’s estate Smith would receive. Smith herself died in 2007 as a result of a drug overdose.

The Idaho city of Twin Falls is named for a waterfall on the Snake River that bears the same name. Also in the Twin Falls area are Shoshone Falls and Pillar Falls, with the former being 46 feet higher than Niagara Falls.

56 Mount Everest is on its border with China : NEPAL

Mount Everest was named by the Royal Geographical Society in 1865. The peak is named for Welsh surveyor George Everest, who had served as Surveyor General of India from 1830 through 1843.

The Social Security Administration (SSA) was set up as part of President Franklin D. Roosevelt’s New Deal. The first person to receive a monthly retirement benefit was Ida May Fuller of Vermont who received her first check for the sum of $22.54 after having contributed for three years through payroll taxes. The New Deal turned out to be a good deal for Ms. Fuller, as she lived to be 100 years of age and received a total benefit of almost $23,000, whereas her three years of contributions added up to just $24.75.