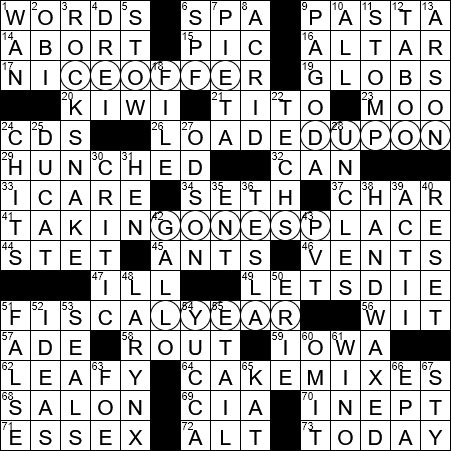 Themed answers include circled letters that spell out the name of a CAKE, The order of those letters has been MIXED, rearranged:

Pound cake is so called because the traditional recipe calls for a pound of each of four ingredients:

Tom Lehrer is an American singer-songwriter, and someone famous for writing humorous songs and parodies.

One’s hap is one’s luck. So to be hapless is to be out of luck, unfortunate.

The African rock python is the largest snake endemic to Africa, and the sixth largest species of snake in the world. It is non-venomous, and kills its prey by constriction. That prey can sometimes be the size of an antelope or even a crocodile.

E & J Gallo Winery was founded by Ernest and Julio Gallo in Modesto, California in 1933. Gallo is the largest exporter of wine from the state of California.

Yuccas are a genus of shrubs and trees that live in hot and dry areas of North and South America. One of the more famous species of Yucca is the Joshua tree. Yuccas has a very unique pollination system, with moths transferring pollen from plant to plant.