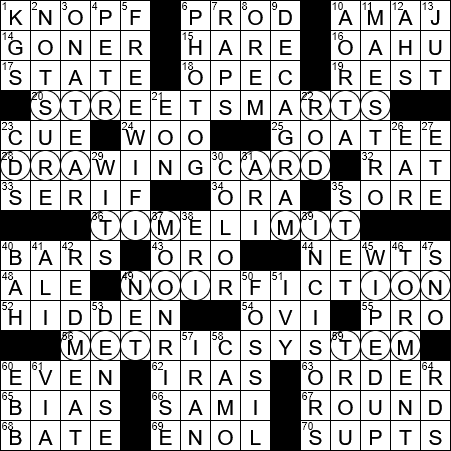 Today’s Theme (according to Bill): Reflections

Themed answers start with a string of three letters, and end with that same string of letters written in the opposite direction:

The publishing house Alfred A. Knopf was founded in 1915 and is based in New York City. Knopf places a distinctive emblem on the title page of the books that it publishes. That emblem is a borzoi dog shown in silhouette.

The suffix “-stan” in many place names is Persian for “place of”. One example is “Pakistan”, the Place of the Pure. “Pakistan” is a relatively recent name, first coined in 1933. It comes from the abbreviation PAKSTAN, standing for Punjab – Afghan Province – Kashmir – Sindh – BaluchisTAN, all regions in the north of India. The “I” was added to Pakistan to make it easier to pronounce, and to fit the translation “Land of the Pure”.

Early in the 1939 movie “The Wizard of Oz”, Glinda, the Good Witch of the North, asks Dorothy, “Are you a good witch, or a bad witch?”

A proctor is a supervisor, especially of an examination in a school, or perhaps of a dormitory. The word “proctor” originated in the late 1500s, a contraction of the word “procurator”, the name given to an official agent of a church.

Salamanders are lizard-like amphibians found in all across the northern hemisphere. They are the only vertebrate animals that can regenerate lost limbs.

Oviducts are the non-mammalian equivalents of the Fallopian tubes. Eggs travel from the ovaries, along the oviduct (there are usually two oviducts, but sometimes only one) and are released into some other organ or anatomical structure depending on species.

Petr Korda is a retired tennis player from Prague in the Czech Republic. Korda fell foul of the sport’s governing body when he tested positive for steroids after a 1998 match at Wimbledon.

The handle of a jug or jug might be referred to as its ear.

In French, “printemps: (spring) is followed by “été” (summer).

There has been a lot of talk about a particular border wall in recent times, but one such barrier that doesn’t get a lot of news coverage in the US is the one being built by the Iranians along the Iran-Pakistan border. The so-called Iran-Pakistan Barrier will extend across 700 kilometers of the desert, and is ten-foot high and three-foot thick concrete wall.

“Duck Dynasty” is a reality television show on the A&E cable channel. The show is centered on the Robertson family from Monroe, Louisiana who made a lot of money selling products to duck hunters. Phil Robertson was in the news in 2013 for views he expressed on homeosexuality and other subjects in an interview with “GQ” magazine.

“Trousers” are pants, the garment covering the lower body and each leg separately. Ultimately, the word “trousers” evolved from the Erse word “triubhas” that described close-fitting shorts. Back in the 1600s there was a colorful saying: