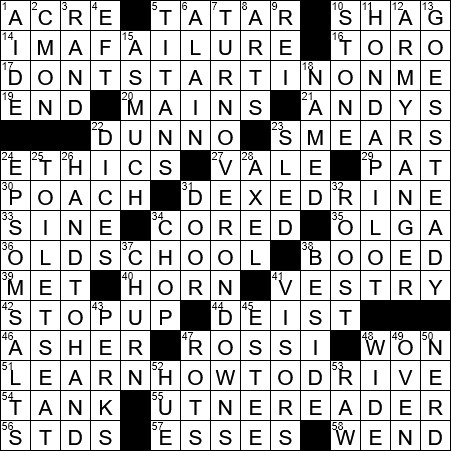 Constructed by: Peter A. Collins

Tatars are an ethnic group of people, mainly residing in Russia (a population of about 5 1/2 million). One of the more famous people with a Tatar heritage was Hollywood actor Charles Bronson. Bronson’s real name was Charles Buchinsky.

Genghis Khan was the founder of the Mongol Empire who was destined to be the largest contiguous empire in the history of the world. He first built his empire by uniting nomadic tribes of northeast Asia, but once Genghis Khan had consolidated his position, he initiated Mongol invasions throughout Eurasia. At it’s height, the Mongol Empire stretched from the River Danube to the Sea of Japan.

“To shag” (I am reliably informed, never having played a game of baseball in my life!) is to chase and catch a fly ball.

The “muleta” is the red flannel cloth that a matador uses towards the end of a bull fight, instead of a cape. The muleta serves to distract the bull and also to hide the sword that is used for the kill. The term “matador” is only used in English, and translates aptly enough as “killer”.

Andy Rooney began his career in newspapers during WWII working for “Stars and Stripes” in London. He had some memorable experiences during the war, including flying on the first American bombing raid over Germany. He was also one of the first American journalists to visit the German concentration camps as they were liberated. He started his segment called “A Few Minutes with Andy Rooney” on CBS’s “60 Minutes” way back in 1978, and so was on our screens for over 40 years. Rooney passed away in 2011.

Andy Griffith was an actor and gospel singer. As an actor, he is perhaps best remembered for his starring roles in TV shows “The Andy Griffith Show” and “Matlock”. As a singer, his 1996 album “I Love to Tell the Story: 25 Timeless Hymns” went platinum and won a 1997 Grammy.

Calligraphy is the art of fine handwriting, and a term derived from the Greek “kallos” meaning “beauty” and “graphein” meaning “to write”.

34. Removed a cylinder from, maybe : CORED

A core test involves the cutting out of a cylinder from the test material. The test might be for compressive strength in concrete, perhaps, or for measuring dates using ice samples.

A vestry is where a priest dresses for services. Like so many English words, “vestry” came into our language via Anglo-Norman, from the Latin “vestarium” meaning “wardrobe”.

Thomas Paine’s pamphlet known as “The Age of Reason” (published in three parts, in 1794, 1795 and 1807) is critical of mainstream religion and also challenges the legitimacy of the Bible.

Apparently, the first use of the verb “to tank” to mean “to lose or fail” can be pinpointed quite precisely. Tennis great Billie Jean King used the verb in that sense in an interview with “Life” magazine in 1967, with reference to male players.

Alexander Hamilton was one of America’s Founding Fathers, chief of staff to General George Washington and the first Secretary of the Treasury. It was Hamilton who founded the nation’s first political party, the Federalist Party. He is also famous for fighting a duel with Vice President Aaron Burr, which resulted in Hamilton’s death a few days later.

In Greek mythology Rhea was one of the Titans. She was the sister and husband of Cronus, and together they had six children, the last of which was Zeus. Cronus swallowed all of his children as soon as they were born, except for Zeus, who Rhea managed to hide from her husband.

Stone Mountain is a granite dome in Georgia that has a circumference of over 5 miles in length. Famously, the dome has a massive bas relief structure of the three Confederate leaders of the Civil War: President Jefferson Davis, General Robert E. Lee and General Stonewall Jackson, each mounted on their favorite horse. The carving surface is 3 acres in area, making it the largest bas relief sculpture in the world.

The Honda Pilot is mid-size crossover SUV that was introduced in 2002. The luxury version of the vehicle is sold as the Acura MDX.

Army Rangers belong to a Special Operations unit known as the 75th Ranger Regiment. The modern Army Rangers have roots that go back to Ethan Allen’s Green Mountain Boys, a militia organization that served in the Revolutionary War.

A pocket door is a sliding door that disappears into a pocket in an adjacent wall.

Martial arts are various fighting traditions and systems used in combat or simply to promote physical well-being. The term ultimately derives from Latin and means “Arts of Mars”, a reference to Mars, the Roman god of war.

Helena Rubinstein was an American businesswoman born in Poland. She arrived in New York City just after the outbreak of WWI, and there opened up her first cosmetics salon. Within a decade she had built a huge chain of salons, and sold off the business to Lehman Brothers in 1928 for over $7 million. A couple of years later during the Great Depression, Rubinstein bought back her business, for less than one million dollars.

29. Word whose meaning can be the same when read backward : PAT

34. Removed a cylinder from, maybe : CORED

51. Words shouted out an open window : LEARN HOW TO DRIVE!

7. Giving up the ball after a fake punt, say, in football lingo : TURNOVER ON DOWNS

8. Word in many degrees : ARTS

13. Sees only one person : GOES STEADY