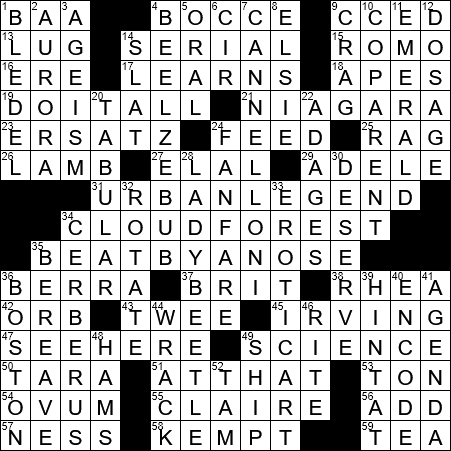 9 Informed as a courtesy, perhaps : CC’ED

“That will be ere the set of sun” is a line from William Shakespeare’s “Macbeth”, a line that is spoken by one of the three witches.

The mighty Niagara River flows from Lake Erie to Lake Ontario, and forms part of the border between the US and Canada. The river is only about 35 miles long, so some describe it as a “strait”. It has a drop in elevation of 325 feet along its length, with 165 feet of that drop taking place at Niagara Falls.

The urban legend known as “The Vanishing Hitchhiker” usually features a hitchhiker who has been picked up and then disappears from the moving vehicle. Spooky …

A cloud forest is a tropical forest that has a particularly persistent cloud cover that maintains a moist atmosphere. That moist atmosphere often produces an abundance of moss on and near the ground, leading to the alternative moniker of “mossy forest”.

36 Catcher in the World Series’ only perfect game : BERRA

The Brit Awards are the British equivalent of the US’s Grammy Awards. The award statuette features the image of Britannia, the female personification of Britain.

In Greek mythology, Rhea was one of the Titans. She was the sister and husband of Cronus, and together they had six children, the last of which was Zeus. Cronus swallowed all of his children as soon as they were born, except for Zeus, who Rhea managed to hide from her husband.

One of the unique features of the planet Uranus is that its north and south poles lie where most other planets have their equators. That means that Uranus’ axis of rotation is almost in its solar orbit.

43 Excessively precious, to a Brit : TWEE

Kyrie Irving is a professional basketball player who grew up in New Jersey, although he was born in Melbourne, Australia to American parents. Irving played for Duke University before launching his NBA career with the Cleveland Cavaliers following the 2011 draft.

English actress Claire Foy is perhaps best known in North America for playing Queen Anne Boleyn in the miniseries “Wolf Hall”, and a young Queen Elizabeth II in the award-winning series “The Crown”.

“The Crown” is a historical drama produced for Netflix that covers the life of British Queen Elizabeth II from her marriage to Philip, Duke of Edinburgh. For the first two seasons, Elizabeth is played by Claire Foy and Philip by Matt Smith. For the next two seasons, Olivia Colman and Tobias Menzies take over as Elizabeth and Philip.

Urquhart Castle is a ruin that sits right on the edge of Loch Ness in the Highlands of Scotland. What’s left of the old castle today dates from the 13th to 16th centuries.

1 Alexis of “The Handmaid’s Tale” : BLEDEL

Alexis Bledel is an actress from Houston who is best known for playing one of the title characters in TV’s “Gilmore Girls”. In the show, Bledel plays the daughter of single mother Lorelai Gilmore, played by Lauren Graham.

“The Handmaid’s Tale” is a remarkably well-received television adaptation of the 1985 novel of the same name by Margaret Atwood. The story is set in a future United State after a Second American Civil War. The “Handmaids” are the few remaining fertile women in the world, who are ritually raped and forced to bear children by their masters.

2 Creator of a colorful atmosphere : AURORA

Beelzebub is an alternative name for the devil. Beelzebub is often described as a demonic fly, and given the moniker “Lord of the Flies”. It was this phrase that William Golding used as the title for his most famous novel.

Columbus Circle is a traffic circle in Manhattan, New York that is named for the statue of Christopher Columbus that stands at its center. When we read distances to New York City along highways, those distances are measured to Columbus Circle.

Cannelloni differs from manicotti, even though both are essentially tubes of pasta. Manicotti (Italian for “sleeves”) are pre-shaped tubes. Cannelloni (Italian for “large reeds”) are rectangular sheets of pasta that are rolled into tubes after having been stuffed with some filling.

“Elsie Dinsmore” is a series of children’s books from author Martha Finley, written between 1867 and 1905. There are 28 volumes in the series.

Emerald is a variety of the mineral beryl that is green in color due to traces of chromium. Beryl containing traces of vanadium are also considered to be emeralds, at least here in the US. “Vanadium emeralds” aren’t recognized as emeralds in Europe.

Cerberus is a dog with three heads that appears in both Greek and Roman mythology. Cerberus had the job of guarding the gates of Hades and preventing those who had crossed the River Styx from ever escaping. A sop is a piece of food that has been dipped in some liquid, as one might sop a piece of bread in soup. There is an idiomatic expression, “to give a sop to Cerberus”, which means to give someone a bribe, or pay someone off. The idea is that if one could bribe Cerberus, give him a sop to eat, then he would let you pass and escape from Hades.