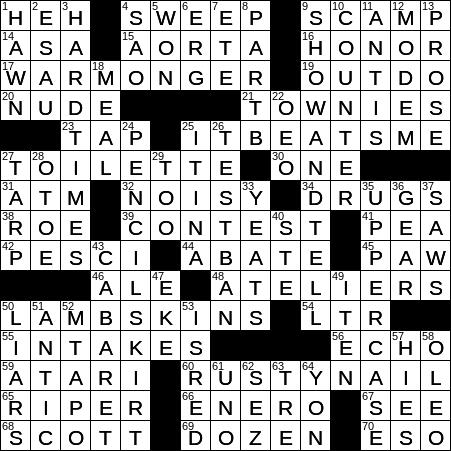 Themed answers are all in the down-direction. The UPPER part of each answer is a type of CASE:

17 Hawk, in the military sense : WARMONGER

The suffix “-monger” indicates a dealer or trader. For example. A fishmonger sells fish, an ironmonger sells hardware, a warmonger proposes military conflict, and an ideamonger deals in ideas..

A French person when dressing is said to be attending to his or her “toilette”.

Convenient for the casino, I’d say …

An atelier is an artist’s studio, with “atelier” being the French word for “studio” or “workshop”.

Centipede is an arcade game from Atari (it is my favorite!). The game was designed by Ed Logg and Dona Bailey, with Bailey being one of the few female game designers back then (it was released in 1980). Perhaps due to her influence, Centipede was the first arcade game to garner a significant female following.

The cocktail called a Rusty Nail is a mixture of Drambuie and Scotch, and is usually served over ice. Without the ice, the drink is sometimes called a Straight-Up Nail. There is also a Canadian version of a Rusty Nail that uses rye whiskey instead of Scotch that’s called a Donald Sutherland, after the celebrated Canadian actor.

In Spanish, the month of “febrero” (February) is preceded by “enero” (January).

Ridley Scott is a British director who came into the public eye with the success of the 1979 film “Alien”. Since then, Scott has directed some great movies, including “Thelma & Louise” (1991), the Oscar-winning “Gladiator” (2000) and “The Martian” (2015). Scott also directed the groundbreaking “1984” advertisement that launched the Apple Macintosh personal computer.

1 Goldie with a Golden Globe : HAWN

I remember watching the ditsy character played by Goldie Hawn on “Rowan & Martin’s Laugh-In”. Hawn used to give great performances on the show, convincing everyone that she was the stereotypical dumb blonde. Well, what a great career she was to carve out for herself!

The term “jackpot” dates back to the 1800s and is from the game of poker. In some variants there are progressive antes. This means that players have to ante up, add to the “pot”, when no player has a pair of “jacks” or better. They build a “jackpot”.

A modem is a device that is used to facilitate the transmission of a digital signal over an analog line. At one end of the line a modem is used to “modulate” an analog carrier signal to encode the the digital information, and at the other end a modem is used to “demodulate” the analog carrier signal and so reproduce the original digital information. This modulation-demodulation gives the device its name: a MOdulator-DEModulator, or “modem”.

“I, Tina” is a 1986 autobiography by Tina Turner. The book was so successful it was adapted into a movie called “What’s Love Got to Do With It?” The film version was released in 1993 and starring Angela Bassett as Tina Turner.

“Easter, 1916” is a poem written in 1916 by Irish poet William Butler Yeats. The work explores Yeats feelings following the failed Easter Rising that attempted to overthrow British rule in Ireland. Yeats was a nationalist and supported the cause of Irish independence, but he also rejected the use of violence. These conflicting emotions are evident throughout the poem. The closing lines of “Easter, 1916” are:

I write it out in a verse–
MacDonagh and MacBride
And Connolly and Pearse
Now and in time to be,
Wherever green is worn,
Are changed, changed utterly:
A terrible beauty is born.

The Moulin Rouge cabaret is located right in the middle of one of the red light districts of Paris, the district of Pigalle. You can’t miss the Moulin Rouge as it has a huge red windmill on its roof (“moulin rouge” is French for “red windmill”). The nightclub opened its doors in 1889 and soon after, the working girls of the cabaret adopted a “respectable” party dance and used it to entice their clients. That was the birth of the can-can. Nowadays, the Moulin Rouge is home to a lavish, Las Vegas-style show that costs millions of euros to stage. It features showgirls, dancers and acrobats, a whole host of entertainers in fact. And I am sure the can-can features as well …

I-10 is the most southerly of the interstate routes that cross from the Atlantic right to the Pacific. I-10 stretches from Santa Monica, California to Jacksonville, Florida. Various stretches of the route have been given different names, for example, the Rosa Parks Freeway, the Santa Monica Freeway, the San Bernardino Freeway and the Christopher Columbus Transcontinental Highway.

Mount Apo is on the island of Mindanao in the Philippines. “Apo” means “master” or “grandfather”, which is an appropriate name for the highest mountain in the country. Mount Apo has been a national park since 1936.

The National Toy Hall of Fame was established in Salem, Oregon in 1998, but was relocated to Rochester, New York in 2002. There were seventeen original inductees, including: