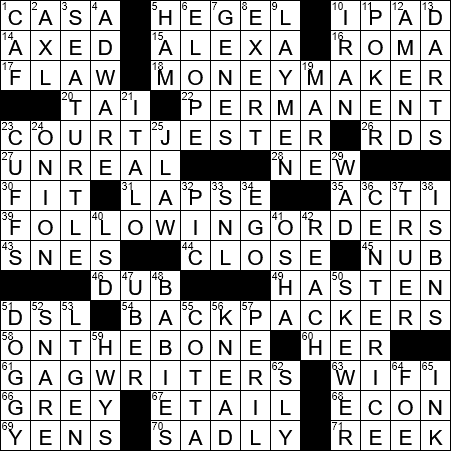 Themed answers each start with a type of ORDER:

5 German philosopher who wrote “The Phenomenology of Spirit” : HEGEL

Georg Wilhelm Friedrich Hegel was a German philosopher, and one of the founders of the German idealism movement. “Idealism”, in the context of the movement, was the principle that objects did not have properties in themselves, but rather that an object’s properties depended on the person perceiving the object.

Microsoft Surface is a series of portable computing devices that includes a line of 2-in-1 detachables, which are crosses between tablets and laptops.

12 Change for the better : AMEND

The city of Venice in northeast Italy is built in a saltwater lagoon on the Adriatic Coast, on 117 small islands. The classic transportation along the waterways is the gondola, but this is really only used for tourists these days, as well as on ceremonial occasions. The locals rely on the motorized water-buses.

Jennifer Lawrence (sometimes “J.Law” in the press) is an actress from Louisville, Kentucky who really hit the big time when she was cast as Katniss Everdeen, the protagonist in the “Hunger Games” series of films.

Instagram (often abbreviated to “Insta”) is a photo-sharing application, one that is extremely popular. Instagram was started in San Francisco in 2010. Facebook purchased Instagram two years later, paying $1 billion. The billion-dollar Instagram company had just 13 employees at the time of the sale …

The drug LSD is often sold impregnated into blotting paper. The paper blotter is usually divided into squares with ¼-inch sides, with each square referred to as a “tab”.

Panna cotta is an Italian dessert made from cream, sugar and gelatin and perhaps some flavoring. The name “panna cotta” really wasn’t used in Italy until the 1960s, and the dish became popular in the US starting in the 1990s.