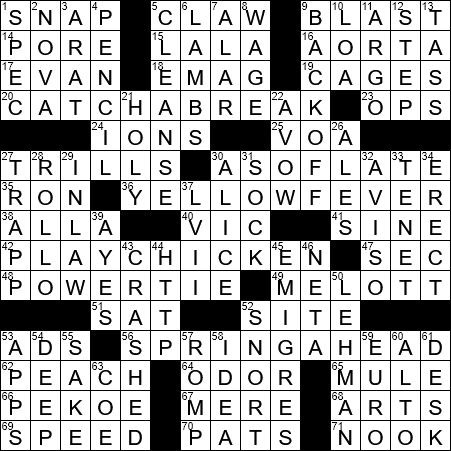 The word SPRING is often seen AHEAD of the last word in each of today’s themed answers:

Evan Spiegel is the CEO of Snapchat, a social media company that he co-founded with two colleagues while they were students at Stanford. Spiegel has done quite well for himself since founding Snapchat. Back in 2015, he was named the world’s youngest billionaire by “Forbes”, at 24 years of age.

The US began shortwave propaganda broadcasts in early 1942, just after America entered WWII. The first broadcast to Germany was introduced by the “The Battle Hymn of the Republic” and opened with the words:

Today, and every day from now on, we will be with you from America to talk about the war. The news may be good or bad for us — We will always tell you the truth.

That first broadcast was called “Stimmen aus Amerika” (“Voices from America”), and gave the fledgling broadcasting operation its name. VOA is still going strong today, and was a station that I used to listen to as a teenager back in Ireland in the early seventies …

Yellow fever is a viral hemorrhagic disease transmitted by female mosquitoes. There are about 30,000 deaths each year from yellow fever, with almost all of those deaths occurring in Africa.

Vic Damone is a singer from Brooklyn, New York. As a young man, Damone started taking voice lessons, inspired by his favorite singer Frank Sinatra. Decades later, Sinatra said that Damone had “the best pipes in the business”.

On the other side of the Atlantic, Daylight Saving Time (DST) is known as “summer time”. The idea behind summer/daylight-savings is to move clocks forward an hour in spring (“spring forward”), and backwards in the fall (“fall back”) so that afternoons have more daylight.

The US state of Georgia has two nicknames: the Peach State, and the Empire State of the South.

A pittance is a small amount, often referring to a living allowance or remuneration. The term came into English from Old French, and is basically an amount given out of “pity”.

The news agency TASS had the full name Telegraph Association of the Soviet Union (Telegrafnoe Agentstvo Sovetskogo Soyuza). When the Soviet Union dissolved in 1992, the Moscow-based agency’s name was changed to ITAR -TASS, with ITAR standing for “Information Telegraph Agency of Russia”. The “ITAR” was officially dropped in 2014, perhaps as a nod to the tremendous brand recognition of “TASS”.

A schooner is a glass of varying capacity, depending on where its used. Over in Britain, a schooner is a large sherry glass. The smaller sherry glass is known as as a clipper, with both names apparently referring to the size of of shops that brought sherry over from Spain. Here in the US, a schooner is usually a beer glass that’s rounded, with a short stem. The size can be anything from 18 oz. to 32 oz.

The von Trapps portrayed in the musical “The Sound of Music” were a real family, as is well known. In the musical and film, the eldest daughter is “Liesl”, although in real life her name was Agathe. Agathe came with her family to the US in 1938, and operated a private kindergarten in Baltimore, Maryland for 35 years. Agathe passed away in 2010.

Alice Hoffman is a novelist who is best known perhaps for her 1995 book “Practical Magic”, which was adapted into a fun 1998 movie of the same name starring Sandra Bullock and Nicole Kidman.

LVII is 57 in Roman numerals.

The HJ Heinz Company is an American concern that is based in Pittsburgh, Pennsylvania. The company was founded in 1869 by Henry John Heinz. It was Heinz himself who came up with the marketing slogan of “57 Varieties”. The “57” really doesn’t have any relevance to the range of products available as Heinz chose the “5” because it was his lucky number, and the “7” because it was his wife’s lucky number.

59. Currency named for a continent : EURO