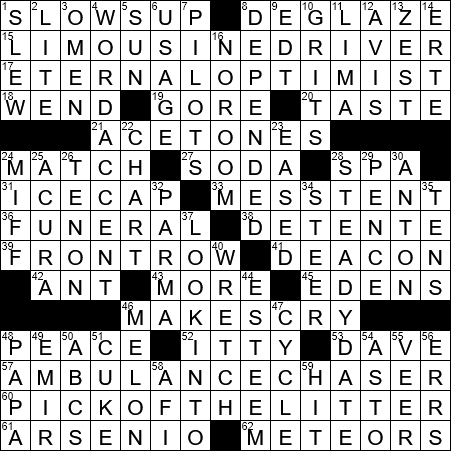 8. Do a sauce preparation job : DEGLAZE

In cooking, deglazing is the removal of browned food residue from the surface of a pan that has been used for cooking a piece of meat. The technique involves the removal of the meat and most of the fat from the pan, and then adding a liquid such as a stock or some wine. The browned food residue is scraped off the pan and dissolved in the liquid. The resulting solution can be served directly as a jus, thickened to form a sauce, or perhaps used as the base for a soup.

Former Vice President Al Gore was a joint recipient of the Nobel Peace Prize in 2007 in recognition for his work in climate change activism. He also won a Grammy for Best Spoken Word Album for his book on climate change called “An Inconvenient Truth”. The documentary of the same name that was spawned by the book won an Academy Award. In addition, Gore won an Emmy as co-owner of Current TV, an independent news network.

Acetone is the active ingredient in nail polish remover, and in paint thinner.

A collector of matchbooks and other match-related items is known as a phillumenist. The term “phillumenist” means “lover of light”.

“Death at a Funeral” is a 2010 American dark comedy that is a remake of a very successful 2007 British film of the same name. I really didn’t like either, to be honest …

“Détente” is a French word meaning “loosening, reduction in tension” and in general it is used to describe the easing of strained relations in a political situation. In particular, the policy of détente came to be associated with the improved relations between the US and the Soviet Union in the seventies.

“Amen” is a sitcom that originally aired in the late 1980s and early 1990s. The show stars Sherman Hemsley, who was better known for playing George Jefferson on “All in the Family” and “The Jeffersons”. In “Amen”, Hemsley plays a widowed deacon of a church in Philadelphia.

“Ambulance chaser” is a derogatory term used for a lawyer. Stereotypically, such a lawyer would follow ambulances into an emergency room and there canvas for clients.

4. Conduct may have it on either end : WORD ACCENT

The way that stresses are distributed among the syllables of a word is known as word stress (also “word accent”).

American Airlines was founded in 1930 through the acquisition of 82 existing small airlines, and initially operated as American Airways. The company name was changed to “American Air Lines” in 1934. Back then, airlines made their profits by carrying the US mail, and American became the first airline to turn a profit on a route that could solely carry passengers. It did so by working with Donald Douglas to develop the DC-3 passenger plane. At that time, American started calling its aircraft “Flagships” and introduced its more wealthy passengers to the first Admirals Club.

As well as being the easternmost state capital, Augusta, Maine is the third smallest, with a population of under 20,000. The least populous state capitals are Montpelier, Vermont (~7,000) and Pierre, South Dakota (~14,000).

10. Breakfast food mentioned in court in “My Cousin Vinny” : GRITS

A pie chart can also be referred to as a circle graph. It is often stated that Florence Nightingale invented the pie chart. While this is not in fact true, she is due credit for popularizing it, and for developing the pie chart variation known as the polar area diagram. The earliest known pie chart appears in a book published in 1801 by Scottish engineer William Playfair.

I remember the days when there used to be 240 pence (pennies) in an Irish/British pound. Life became so much easier when that was changed to 100 “new” pence in 1971.

Parma is a city in northern Italy, famous for its ham (prosciutto) and cheese (parmesan). The adjective “Parmesan” means of or from Parma.

“Amazing Grace” is a very, very famous hymn, with words written by John Newton in 1779. The words have been set to a number of different melodies, and what we are used to hearing today is music from a tune called “New Britain”.

Amazing Grace, How sweet the sound
That saved a wretch like me
I once was lost, but now am found
T’was blind but now I see

In recent years, indoor cycling on stationary bicycles has come to be known as “spinning”. “Spinning” is actually a brand name of indoor bicycle that was launched in 1993 by Mad Dogg Athletics. Mad Dogg is trying to defend the use of the term “spinning” as a trademark, but it’s an uphill climb (pun!).

A curriculum (plural “curricula”) is a set of courses offered by a teaching establishment. “Curriculum” is Latin for “running, course”, and comes from “currere” meaning “to run”.

The American Film Institute (AFI) was founded in 1967 by the National Endowment for the Arts (NEA). One of the AFI’s more visible programs is the “100 Year Series”, including lists of Best Movies in several categories and a list of the Best Movie Quotes in 100 years of movie-making.