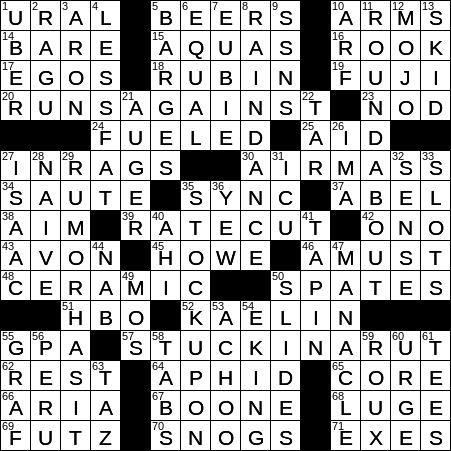 Themed answers are a bunch of letters STUCK inside the word RUT:

The Fuji apple is a cross between two American varieties of apple that was developed in Japan, i.e. a cross is between Red Delicious and old Virginia Ralls Genet.

There are actually four rivers called the Avon in England, but “Shakespeare’s Avon” lies mainly in Warwickshire. The name “Avon” comes from the Old English word for a river, “abona”. Stratford-upon-Avon was the birthplace of William Shakespeare.

Gordie Howe is a retired Canadian hockey player. Regarded as one of the game’s greatest players, Howe is sometimes referred to as “Mr Hockey”. He is the only hockey player to have competed in the NHL for five decades (from the forties through the eighties), and holds the NHL record for most games and most seasons played.

Home Box Office (HBO) is the second largest network of premium channels in the US, after Encore. HBO is a favorite of mine as I really like many of the HBO made-for-television movies and especially the HBO original series. Among the list of original series from HBO are “Mildred Pierce”, “The Pacific”, “John Adams”, “Big Love”, “Extras”, “The Wire”, “Sex and the City”, “From the Earth to the Moon”, “The Sopranos” and “Band of Brothers”. What great television …

The actor Kato Kaelin’s 15 minutes of fame came in 1964 when he was called as a witness in the trial of O. J. Simpson for the murders of his wife and Ronald Goldman. Kaelin had been staying at the guest house on the Simpson property and was called to account for some of the movements of O. J. on that fateful night.

57. Trapped by mundanity … and hint to the answers to starred clues : STUCK IN A RUT

Something mundane is a of the world, something ordinary. The term “mundane” comes from the Latin “mundus” meaning “universe, world”.

Aphids are called “greenfly” back in the British Isles where I come from. The most effective way to control aphids, in my experience, is to make sure there are plenty of ladybugs in the garden (called “ladybirds” in Ireland!).

To futz around is to waste time on trivial matters, to fool around. “Futz” is probably derived from a “not so nice” word that has been merged with “putz”.

1. App that arranges a lift but not a Lyft : UBER

Elvis Aron Presley (aka “the King”) was the younger of two identical twins. His brother was stillborn, and delivered 35 minutes before Elvis. The brother was named Jesse Garon Presley. So, although born a twin, Elvis was raised as an only child.

The equals sign (=) was the 1557 creation of a Welsh physician and mathematician Robert Recorde. Recorde proposed the use of two parallel lines to indicate equality “because no 2 things, can be more equal.”

An auger is a drill, a boring tool [Yawn].

“Tar Heel” is a nickname for anyone living in, or from, the state of North Carolina. As such, it is the also nickname for an athlete of the University of North Carolina (UNC). No one seems to know for sure where the term “Tar Heel” originated, but it is thought to be related to the historical importance of the tar, pitch and turpentine industries that thrived in the state due to the presence of vast forests of pine trees.

The children’s song “I’m a Little Teapot” was written and published in 1939, composed by a married couple who ran a dance school for children. They needed a simple tune that young ones could use to learn a simple tap routine, and came up with this:

Isaac Hayes was a soul singer and songwriter. Hayes wrote the score for the 1971 film “Shaft”, and the enduring “Theme from ‘Shaft’” won him an Academy Award in 1972.

Steffi Graf is a former World No. 1 professional tennis player from Germany. Graf won 22 Grand Slam singles titles, more than any other man or woman other than Margaret Court. She is married to another former World No. 1, namely Andre Agassi.

Peru’s name comes from the word “Biru”. Back in the early 1500s, Biru was a ruler living near the Bay of San Miguel in Panama. The territory over which Biru ruled was the furthest land south in the Americas known to Europeans at that time. The Spanish conquistador Francisco Pizarro was the first European to move south of Biru’s empire and the land that he found was designated “Peru”, a derivative of “Biru”.

“Ecuador” is the Spanish word for “equator”, which gives the country her name.