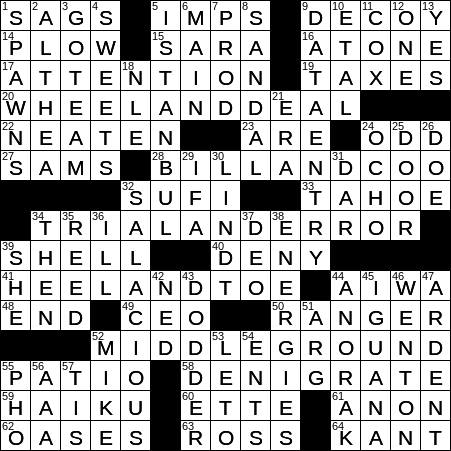 Themed answers are common “x AND y” phrases, and each includes LAND as a hidden word:

Actress Sara Gilbert grew up playing Darlene on the sitcom “Roseanne” from 1988 to 1997. Today Gilbert appears fairly often on another hit sitcom, namely “The Big Bang Theory”. You can also see her on the daytime talk show called “The Talk”, a show that she herself created. And, she made a comeback as Darlene in 2018 in the “Roseanne” reboot(s).

“Ten-hut!” is a term used in the US military that means “Come to attention!”.

Sam’s Club is a warehouse club that is owned and operated by Walmart. It is named after the company’s founder Sam Walton.

When birds bill and coo together they touch beaks and make noises to each other. The term “bill and coo” is also used when two lovers talk quietly to each other, and kiss.

A sufi is a Muslim mystic, an ascetic. Apparently, the term “sufi” can be translated as “man of wool”. This might be a reference to the practice of donning holy garments made from wool, as opposed to silk.

A haiku is a very elegant form of Japanese verse. When writing a haiku in English we tend to impose the rule that the verse must contain 17 syllables. This restriction comes from the rule in Japanese that the verse must contain 17 sound units called “moras”, but moras and syllables aren’t the same thing. Sadly, the difference is not so clear to me. Here’s an example of a Haiku:

A drum major is a leader of a marching band, and is a position that originated in the British Army Corp of Drums in 1650. The drum major’s job is to lead the group and ensure that the whole ensemble keeps time. To help him do so, a drum major often uses a large baton. Over time, it became customary for the baton to be twirled and tossed in an elaborate display. The drum major tradition was embraced by high school marching bands in America. Drum-majorettes became popular in the 1930s, with groups of females taking up baton-twirling and marching with bands. According to an article in “Life” magazine published on October 10th, 1938, “the perfect majorette is a pert, shapely, smiling extrovert, who loves big, noisy crowds and knows how to make those crowds love her.” It was a different time …

Ross Geller is the character on “Friends” played by David Schwimmer. The role was actually written with Schwimmer in mind, and so Ross was the first of the “Friends” to be cast.

Immanuel Kant was an 18th-century, German philosopher. Kant published “Perpetual Peace” in 1795, laying out what he believed were conditions for ending all wars and creating a lasting peace. The good news for us is that one of these conditions was to have a world full of constitutional republics, so it seems we are on the right track here in the US!

Althea Gibson was known as “the Jackie Robinson of tennis” as she broke the “color barrier” and became the first African-American woman to win a Grand Slam title, in France in 1956. She was quite the athlete and was a great golfer as well as a great tennis player. She was the first African-American woman to play in the Ladies PGA tour, although she never had a win. Outside of sport, she sang a little and recorded an album, and even appeared in a movie (“The Horse Soldiers”) with John Wayne and William Holden. Sadly, towards the end of her life she ended up destitute and on welfare. When her plight was made known in a tennis magazine, well-wishers from all over the world sent her gifts of money, a total of nearly one million dollars. Quite a story …

Istanbul, Turkey (formerly “Byzantium” and “Constantinople”) is the only metropolis in the world that is situated in two continents. The city extends both on the European side and on the Asian side of the Bosphorus river.

Courteney Cox played Monica Geller on the incredibly successful sitcom “Friends”. Before “Friends” she played the girlfriend of Michael J. Fox’s character on “Family Ties” for a couple of years in the late eighties. Her role in “Friends” was her biggest success, no question, when she and her fellow female co-stars became the highest paid TV actresses ever, earning a million dollars per episode.

The delicious Swiss chocolate sold under the Lindt brand name has its origins in a small confectionery store in Zurich in the 1840s. Lindt purchased the San Francisco-based chocolate company Ghirardelli back in 1998.

I loved the “Nancy Drew” mysteries as a kid (I know, as a boy I “shouldn’t” have been reading girls’ books!). The “Nancy Drew stories” were written by a number of ghost writers, although the character was introduced by Edward Stratemeyer in 1930. Nancy Drew’s boyfriend is Ned Nickerson, a college student from Emerson.

Jared Leto is an actor and musician. In the world of music, Leto is the lead singer and rhythm guitarist for the rock band 30 Seconds to Mars. In the film world, one of his most critically acclaimed role was that of a heroin addict in “Requiem for a Dream”. He also appeared in “American Psycho”, “Panic Room” and “Lord of War”. Leto won a Best Supporting Actor Oscar for his performance in 2013’s “Dallas Buyers Club”, which he portraying a transgender woman.

“Dallas Buyers Club” is a 2013 film that tells the real-life story of AIDS patient Ron Woodroof. Woodroof smuggled unapproved AIDS drugs across the US border into Texas in opposition to the Food and Drug Administration (FDA). The movie won the Best Actor Oscar for Matthew McConaughey and Best Supporting Actor for Jared Leto.