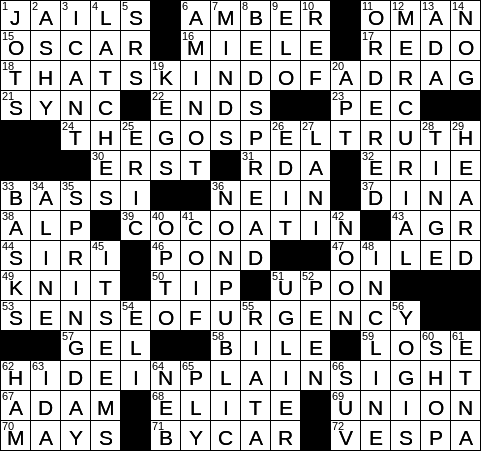 Themed answers include a synonym of “HIDE” as a hidden word:

Miele is a manufacturer of kitchen equipment based in Germany. The company was founded by Carl Miele and Reinhard Zinkann in 1899, and is still privately-held and family-run. One of Miele’s first products was a butter churn.

Milton Hershey used profits from the sale of his successful Lancaster Caramel Company to construct a chocolate plant in his hometown of Derry Church, Pennsylvania. Hershey started building the factory in 1903, and by 1906 his chocolate was so successful that Derry Church changed its name to Hershey, Pennsylvania.

She should have died hereafter;
There would have been a time for such a word.
— To-morrow, and to-morrow, and to-morrow,
Creeps in this petty pace from day to day,
To the last syllable of recorded time;
And all our yesterdays have lighted fools
The way to dusty death. Out, out, brief candle!
Life’s but a walking shadow, a poor player
That struts and frets his hour upon the stage
And then is heard no more. It is a tale
Told by an idiot, full of sound and fury
Signifying nothing.

Adam West was the actor who played the title role in the sixties TV series “Batman”. More recently West voiced the character named “Adam West” on the animated show “Family Guy”. Back in 1970, West was offered the role of James Bond in the movie “Diamonds are Forever”, but he turned it down!

Willie Mays’ nickname was the “Say Hey Kid”, although his friends and teammates were more likely to refer to him as “Buck”. When Mays was inducted into the Baseball Hall of Fame, he was asked who was the best player he’d ever seen in the game. He replied, “I don’t mean to be bashful, but I was.”

72. What Italians may use to commute : VESPA

Vespa is a brand of motor scooter that was originally made in Italy (and now all over the world) by Piaggio. “Vespa” is Italian for “wasp”.

A “jot” is something very small, from the Latin “jota”, which in turn is from the Greek “iota”, the smallest letter in the Greek alphabet. The verb “to jot” comes from the noun, in the sense of making a small, short note.

“Mercurial” is an adjective used to describe things related to Mercury, the god or the planet. A person described as mercurial is said to have a changeable temperament, a characteristic long associated with people born under the influence of the planet. This erratic quality may be an association with the fluid properties of mercury, the liquid metal.

“South Park” is an adult-oriented cartoon series on Comedy Central. I don’t do “South Park” …

Christian Dior was a French fashion designer. As WWII approached, Dior was called up by the French military, drawing a temporary halt to his career in fashion. He left the army in 1942 and for the duration of the war designed clothes for wives of Nazi officers and French collaborators. After the war his designs became so popular that he helped re-establish Paris as the fashion center of the world.

Amy Lowell was an American poet, and the winner of the Pulitzer Prize for Poetry in 1926 for the collection of her poems called “What’s O’Clock”.

Our word “noon”, meaning “midday”, comes from the Latin “nona hora” that translates as “ninth hour”. Back in Ancient Rome, the “ninth hour” was three in the afternoon. Over the centuries, traditions such as church prayers and “midday” meals shifted from 3 p.m. to 12 p.m., and so “noon” became understood as 12 noon.

Mount Etna on the island of Sicily is the largest of three active volcanoes in Italy, and indeed the largest of all active volcano in Europe. Etna is about 2 1/2 times the height of its equally famous sister, Mt. Vesuvius. Mt. Etna is home to a 110-km long narrow-gauge railway, and two ski resorts.