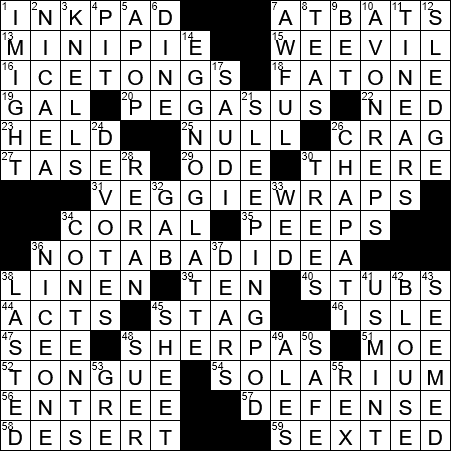 A weevil is a small beetle known for the damage that it can do to crops. The boll weevil damages cotton plants by laying eggs inside cotton bolls. The young weevils then eat their way out. Some weevils have snouts that are as long as their body.

16 Handlers for a mixologist : ICE TONGS

A mixologist is someone who is well versed in the mixing of cocktails, said he reaching for the shaker …

“Ned and Stacey” is a sitcom that first aired in the nineties. The title roles were played by Thomas Haden Church and Debra Messing. Ned and Stacey are a couple in a marriage of convenience. Ned needs a wife in order to get a promotion at work, and Stacey just wants to get out of her parents’ house. I’ve never seen this one …

“The Simpsons” television show is meant to be set in “anytown, USA”. The creators chose the name “Springfield”, as it is one of the most common town and city names in the country.

2 City for which a creed is named : NICAEA

What is known today in the Christian tradition as the Nicene Creed, was originally adopted by the first ecumenical council when it met in 325 AD. The meeting took place in the city of Nicaea, which gave its name to this particular profession of faith. Nicaea is the Greek name of the city that is now called Iznik, and it lies in the northwest of Turkey.

The word “knell” is used for a solemn ring from a bell, often associated with death or a funeral. “Knell” comes from the Old English “cnell” and is probably imitative in origin, sounding like a peal from a large bell.

A sledgehammer is a big hammer, one used to apply a lot of force. The word “sledgehammer” comes from the Anglo Saxon “Slaegan” meaning “to strike violently”. “Slaegan” is also the root of the words “slag”, “slay” and “slog”.

17 Many an Arab News reader : SAUDI

“Arab News” is an English-language paper published in Ryadh, the capital of Saudi Arabia. It was founded in 1975, and had a major relaunch in 2018.

30 According to the poet’s oldest son, it was written “by a window looking down a wooded hill” : TREES

The American journalist and poet Joyce Kilmer is primarily known for his 1913 poem titled “Trees”. The original text of the poem is:

I think that I shall never see
A poem lovely as a tree.
A tree whose hungry mouth is prest
Against the earth’s sweet flowing breast;
A tree that looks at God all day,
And lifts her leafy arms to pray;
A tree that may in summer wear
A nest of robins in her hair;
Upon whose bosom snow has lain;
Who intimately lives with rain.
Poems are made by fools like me,
But only God can make a tree.

Kilmer died a few years after writing “Trees”. He was a casualty of the Second Battle of the Marne in 1918 at the age of 31.

Rex was a Cavalier King Charles Spaniel owned by the Reagans while they lived in the White House. Rex was given as a Christmas gift by conservative commentator William F. Buckley, Jr. to First Lady Nancy Reagan. The dog was named for Rex Scouten, who was the White House Chief Usher at the time.