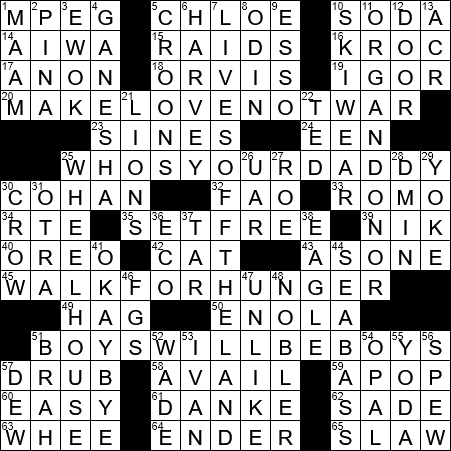 The Moving Picture Experts Group (MPEG) was established in 1988 to set standards for audio and video compression. The standards they’ve come up with use the acronym “MPEG”.

Jacques Offenbach’s operetta “Daphnis et Chloé” is an 1849 work based on the ancient Greek novel of the same name by Longus.

Jacques Offenbach was a French composer who was born in Germany. Even though he wrote over 100 operettas, Offenbach is perhaps best known for his unfinished opera “The Tales of Hoffman”.

In the halcyon days of yore, a “soda jerk” was usually a young person whose main job was to serve ice cream sodas in a drugstore. The server would “jerk” the handle on the soda fountain to dispense the soda water, giving the job its distinctive name.

The business strategy known as “corporate raiding” really is pretty ruthless and short sighted (excuse my being judgmental). The idea is to buy a large interest in a corporation, sometimes “stealthily”, by buying up a significant number of voting shares. Then, the raider uses the power of the voting rights to convince other voters to change the way the company is run, purely to increase the share price in the relatively short term. The changes often involve replacement of the management team, downsizing and even liquidation of the company, all for short term, personal gain. Corporate raider, Gordon Gekko said in the 1987 movie “Wall Street”, “greed is good”, but I wonder is he right?

“Anon” originally meant “at once” and evolved into today’s meaning of “soon” apparently just because the word was misused over time.

Igor Kipnis was a German-born American harpsichord and piano player. As a harpsichordist, Kipnis was famous for playing not just the classics from the 16th through 18th centuries, but also contemporary works and jazz pieces.

The most familiar trigonometric functions are sine, cosine and tangent (abbreviated to “sin, cos and tan”). Each of these is a ratio, a ratio of two sides of a right-angled triangle.

I suppose much of what many of us know about American entertainer George M. Cohan comes from the 1942 film about his life called “Yankee Doodle Dandy”, which stars Jimmy Cagney as Cohan. There is an 8-foot bronze statue of Cohan on Broadway in New York City that was erected in 1959 at the behest of the lyricist Oscar Hammerstein.

Tony Romo is a quarterback for the Dallas Cowboys. Romo is also an avid amateur golfer and has even tried (albeit unsuccessfully) to qualify for the US Open golf championship.

Project Bread’s Walk for Hunger is an fundraising event that has been held annually in Boston since 1969. That makes it the oldest pledge walk in the nation. The goal of the event is to raise funds used for reducing the number of food insecure people in the state of Massachusetts.

Once can say “thank you” with “merci” in French, with “gracias” in Spanish, and with “danke” in German.

Orson Scott Card is a science fiction author (mainly). Card’s most famous work is his novel “Ender’s Game” first published in 1985. “Ender’s Game” was adapted into a movie and released in 2013, with a cast that includes Harrison Ford.

In Spanish, “un cóctel” (a cocktail) might contain some “piña” (pineapple).

4. Hindu god with the head of an elephant : GANESHA

Ganesha is the Hindu deity who is usually depicted with the head of an elephant.

Steve Harvey is a comedian and TV personality who really started his successful career in 1990 when he landed the job of hosting “It’s Showtime at the Apollo” in 1990. He has hosted “The Steve Harvey Morning Show” on the radio since 2000, and “Family Feud” on television since 2010.

In Norse mythology, Valhalla (“hall of the slain”) is a gigantic hall in the “world” of Asgard. Asgard and Valhalla are ruled by the god Odin, the chief Norse god.

A schuss is a very fast run downhill in skiing, with no turns taken to slow the pace of the descent. “Schuss” is a German word for “shot”.

21. Only NFC team that hasn’t played in a Super Bowl : LIONS

The acronym “TED” stands for Technology Entertainment and Design. TED is a set of conferences held around the world by a non-profit group called the Sapling Foundation. The conference subjects are varied, and the meetings are often led by big names such as Bill Clinton, Al Gore, Bill Gates and Jane Goodall. The Sapling Foundation then makes recordings of the conferences available for free online with the intent of disseminating the ideas globally. These conferences are known as “TED Talks”.

The idiom “in one’s wheelhouse” means “within one’s area of expertise”. The idea is that someone in his or her element is like a captain in the wheelhouse, in command of a vessel.

The United Arab Republic (UAR) was a union between Egypt and Syria made in 1958 and dissolved in 1961 when Syria pulled out of the arrangement.

Beethoven’s “Symphony No. 9” is his wonderful “Choral” symphony. When it was composed in 1824 it was the first time that a major composer had used voices in a symphony. By the time of the Ninth’s premier, Beethoven was essentially deaf. He insisted on sharing the stage with the musical director (who was conducting), and was visibly counting out time but was off by quite a few measures. When the last notes were played there was enthusiastic applause, although Beethoven was still conducting. The lead contralto had to walk over to Beethoven, stop him, and turn him to the audience to receive his adulation.

“Foucault’s Pendulum” is a 1988 Italian novel by Umberto Eco that was translated into English by William Weaver the following year. The title of the book refers to a large pendulum that was constructed by French physicist Léon Foucault to demonstrate the effect of the Earth’s rotation.

“Brah” is an alternative to “bro”, with both being slang for “brother”.

The name “John” translates into Scottish as “Ian”, into Russian as “Ivan”, into Italian as “Giovanni”, and into Irish as “Seán”.

Girasol is a type of opal that exhibits a bluish glow when illuminated. The stone is also known as “water opal”, especially when sourced from Mexico.