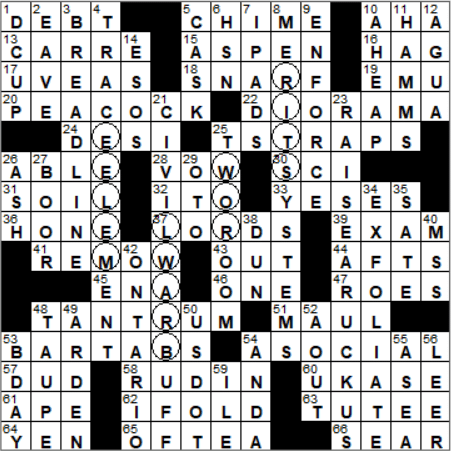 Themed answers are all in the down-direction. Each includes a hidden word written in the up-direction. That word is shown using circled letters in the gird, and is a synonym of “RUCKUS”:

A diorama is a full-scale of small-scale replica of a scene. We mostly see full-size dioramas in museums, whereas our kids might create small-scale dioramas as homework projects. The original diorama was a picture-viewing device that was invented in 1822 by Louis Daguerre and Charles Marie Bouton. These historic dioramas were quite large, and featured scenes that appeared to change as the lighting was manipulated.

32. Skater who lit the Olympic cauldron in Nagano : ITO

33. Responses from a sycophant : YESES

Scott Rudin is a film and theater producer who was president of production with 20th Century-Fox for nearly 15 years. In 2012, Rudin became the first producer to win the grand slam of American show business, i.e. an Emmy, Grammy, Oscar and Tony.

In Imperial Russia, a ukase was a proclamation issued by the government or the tsar. We now use the term to describe any order issued by an absolute authority.

Jon Hamm lived the life of a struggling actor for quite some time before he hit gold with the starring role in the AMC drama “Mad Men”. He plays the main character, advertising executive (and man about town), Don Draper. I am told by my wife and female friends, that he is quite good looking. I don’t see it myself …

A buff or a nut is someone who is extremely enthusiastic and knowledgeable about a subject. For example, one might be a movie buff, or perhaps a baseball nut.

23. Cause commotion … or what the circled letters do? : RAISE A RUCKUS

The word “ruckus” is used to mean a commotion, and has been around since the late 1800s. “Ruckus” is possibly a melding of the words “ruction” and “rumpus”.

That might be the ash tapped off a cigarette.

To dun is to insist on payment of a debt. The etymology of the verb is unclear, with one suggestion that it dates back to a famous debt collector in London named Joe Dun.

In French, “août” (August) is a month in “l’été” (the summer). Note that the names of months are not capitalized in French.