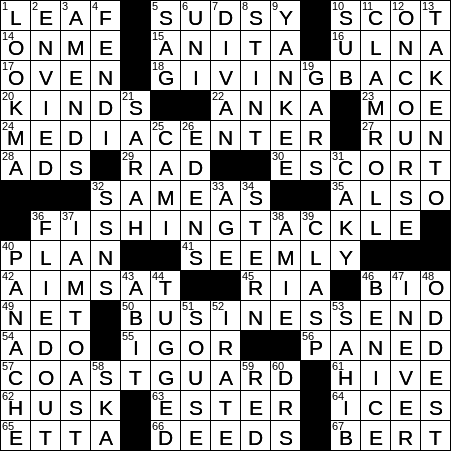 Themed answers are common phrases that have been reinterpreted as football players:

Troon is a town located on the west coast of Scotland just north of Glasgow. One of Troon’s claims to fame is the Royal Troon golf course, which regularly hosts the Open Championship.

In Leonard Bernstein’s “West Side Story”, the female lead character is Maria. Her older friend Anita is also in the gang called the Sharks.

“America” is a song from Broadway musical “West Side Story” with lyrics by Stephen Sondheim and music by Leonard Bernstein. The lyrics used in the stage version of the musical differ somewhat from the lyrics used in the 1961 film adaptation. The original lyrics were reportedly changed to present a more honest view of the immigration experience, and to remove wording that demeaned Puerto Rico and the Puerto Rican people.

16 It parallels a radius : ULNA

In a general sense, a polyester is any polymer containing the ester functional group in the main chain. In this sense, the list of polyesters includes naturally occurring compounds as well as synthetics. More specifically, the term “polyester” is often synonymous for the synthetic compound polyethylene terephthalate (PET), which is the main constituent of the manufactured fibers Dacron and Terylene.

There are 28 deed cards in the game of Monopoly. There are deeds for 22 properties/streets, 2 utilities, and 4 railroads.

Fendi is an Italian fashion house that was founded in 1925 by Adele Casagrande. Fendi started out as a fur and leather shop in Rome, and these days is famous for its line of handbags.

Divans are essentially couches without backs or arms. The design originated in the Middle East, where the couches were commonly found lining the walls of an office that was known as a “divan” or “diwan”, meaning “government office”.

Mariano Rivera is a professional baseball pitcher from Panama City. Rivera played for the New York Yankees from 1995 until his retirement at the end of the 2013 season. Rivera holds the league record for the most career saves (at 652). He is known by the nicknames “Mo” and “Sandman”.

Famously, Sarah Palin was the Governor of Alaska from 2006 until 2009, and had been the Mayor of Wasilla, Alaska from 1996 until 2002. However, Palin is not a native Alaskan. She was born Sarah Heath in 1964 in Sandpoint, Idaho. Her father was a science teacher and took a position in Skagway, Alaska when Palin was just a few months old.

36 Hit one that was caught on the warning track, say : FLIED OUT

“Dr. No” may have been the first film in the wildly successful James Bond franchise, but it was the sixth novel in the series of books penned by Ian Fleming. Fleming was inspired to write the story after reading the Fu Manchu tales by Sax Rohmer. If you’ve read the Rohmer books or seen the films, you’ll recognize the similarities between the characters Dr. Julius No and Fu Manchu. By the way, author Ian Fleming tells us that Julius No attended medical school in Milwaukee.