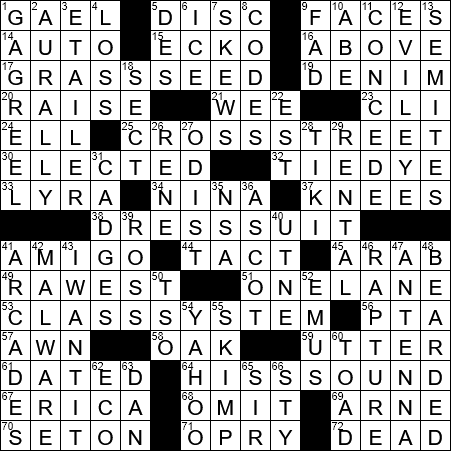 Themed answers each include the letter sequence S-S-S:

15 Marc with a clothing brand : ECKO

Marc Ecko is a fashion designer from New Jersey. Marc was born Marc Milecofsky. In college, he became a fan of graffiti and used the name “Ecko” to tag his drawings.

25 Hollywood or Vine, vis-à-vis the other : CROSS STREET

Lyra (Latin for “lyre, harp, lute”) is a constellation that includes the star Vega, one of the brightest stars in the night sky. The constellation Lyra is surrounded by the neighboring constellations of Draco, Hercules, Vulpecula and Cygnus.

64 Leaky tire noise found in five puzzle answers including this one : HISS SOUND

Thomas Arne was an English composer from London. Arne wrote some iconic compositions, most notably “Rule, Britannia!” He also wrote a version of “God Save the King” that became the British national anthem.

“Rule, Britannia!” was a poem by James Thomson, for which Thomas Arne composed the famous music.

Abraham Lincoln was the 16th President of the US, elected in 1860 as the first president from the Republican Party. Lincoln’s electoral support came almost exclusively from the north and west of the country, winning only 2 out of 996 counties in the Southern slave states. Lincoln led the country through Civil War, and then was assassinated in 1865 just a few days after Robert E. Lee surrendered his army of Northern Virginia. President Lincoln was succeeded in office by Vice President Andrew Johnson.

The phrase “in the ballpark” means “within an acceptable range of approximation”. The term was coined in the mid-fifties as jargon used by scientists developing atomic weapons. The first “ballpark” in this sense was the broad area within which a missile was forecast to return to earth.

Malware is software and program code that is created to intentionally disrupt and exploit computer systems. Viruses, worms, trojan horses and spyware are all covered by the term. “Malware” is short for “malicious software”.

There is a story that just before Abraham Lincoln was elected president in 1860, he received a letter from a 12-year-old girl who criticized Lincoln’s appearance and his pockmarked, gaunt face. The little girl, Grace Bedell from New York, promised to get her brothers to vote for Lincoln if he would just grow a beard. However, Lincoln waited until after the election to grow his famous whiskers, a distinctive look that would forever be associated with his presidency.

60 “The Wind in the Willows” amphibious Mr. : TOAD

The epic 1994 movie “Forrest Gump” is based on a 1986 novel of the same name by Winston Groom. Groom said that he had envisioned John Goodman playing the title role, and not Tom Hanks.

In the British honors system, “Dame” is the feminine form of address for the honor of knighthood, and is equivalent to the male form “Sir”.