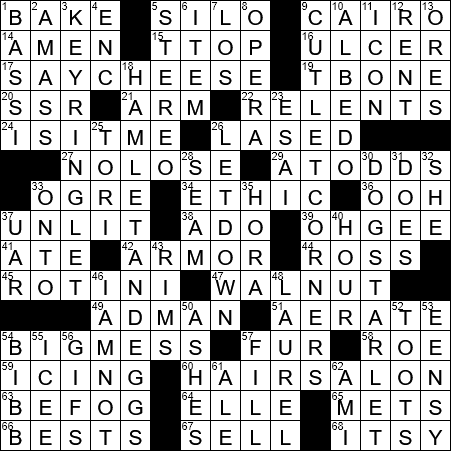 Themed answers are in the DOWN-direction. Each is a common phrase, but with “LET” inserted:

The Illinois city of Cairo is the most southerly city in the state. It sits at the confluence of two mighty rivers, where the Mississippi joins the Ohio. Cairo is surrounded by a region known as Little Egypt. It is thought that “Little Egypt” is a reference to the similarity of the area’s fertile soil to that in Egypt’s Nile Delta. The city name “Cairo” is said to reflect that same etymology.

Until fairly recently, a peptic ulcer was believed to be caused by undue amounts of stress in one’s life. It is now known that 70-90% of all peptic ulcers are in fact associated with a particular bacterium.

Photographers often instruct us to say “cheese” to elicit a smile-like expression. Even Japanese photographers use the word “cheese” to achieve the same effect. Bulgarians use the word “zele” meaning “cabbage”. The Chinese say “eggplant”, the Danish “orange”, the Iranians “apple” and the most Latin Americans say “whiskey”.

Estonia is one of the former Soviet Socialist Republics (SSRs) and is located in Northern Europe on the Baltic Sea due south of Finland. Estonia has been overrun and ruled by various empires over the centuries. The country did enjoy a few years of freedom at the beginning of the 20th century after a war of independence against the Russian Empire. However, Estonia was occupied again during WWII, first by the Russians and then by the Germans, and then reoccupied by the Soviets in 1944. Estonia has flourished as an independent country again since the collapse of the USSR in 1991.

“Troll” is a term that comes from Norse mythology. Trolls are less than helpful creatures that tend to live on isolated mountains, in caves and under bridges.

James Clark Ross was a Royal Navy officer and polar explorer. He is particularly known for his 4-year exploration of the Antarctic, starting in 1839. Ross and his team spent much of that expedition exploring the deep bay of the Southern Ocean that now bears his name, i.e. the Ross Sea. Ross discovered the continent’s Transantarctic Mountains and the volcanoes now known as Erebus and Terror. The two warships that Ross used for his expedition were names HMS Erebus and HMS Terror.

64 Magazine with a pronoun for a title : ELLE

“Man cave” is a slang term for a male sanctuary within a home. That sanctuary is often a spare bedroom (as it is in our house) or a converted garage.

Los Altos is a wealthy city located not far from here, and is a largely residential community serving Silicon Valley and San Francisco. “Los Altos” is Spanish for “the heights”.

Albedo is the reflective power of a surface. The concept is particularly important in the sciences of climatology and astronomy, and often refers to the proportion of incident light that is reflected back by the surface of a planet or moon. The term “albedo” is Latin for “whiteness”.

18 Breakfast theater offering? : HAMLET AND EGGS (from “ham and eggs”)

When you look up at the night sky, the brightest star you can see is Sirius. Sirius appears so bright to us because it is relatively close to the Earth. Sirius is commonly known as the “Dog Star” because it can be seen in the constellation Canis Major, the “Big Dog”.

The United Arab Republic (UAR) was a union between Egypt and Syria established in 1958. The UAR dissolved in 1961 when Syria pulled out of the arrangement.

A poet laureate is a poet who is officially pointed by some institution to compose works for special occasions. The US Poet Laureate is more correctly known as the Poet Laureate Consultant in Poetry to the Library of Congress. To be “laureate” is to be “crowned with laurels”. In ancient Greece, poets and heroes were honored with a crown or wreath made from laurels.

Bibb is a variety of lettuce in the cultivar known as butterhead. All butterhead varieties have loose-leafed heads and a buttery texture.