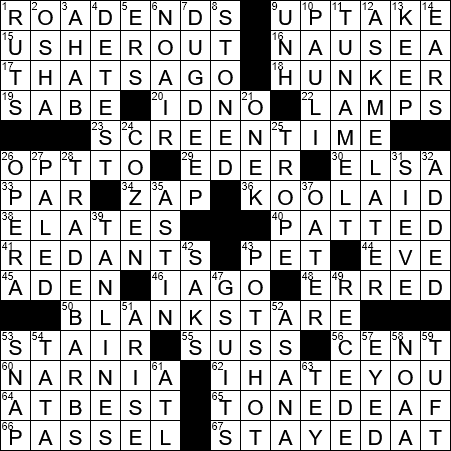 “Nausea” is a sick feeling in the stomach. The term derives from the Greek “naus” meaning “ship”, and so was originally associated only with seasickness.

“Quién sabe?” is Spanish for “who knows?”

unGlue is an app that can be installed by parents on their children’s smart devices, with the intent of limiting the amount of time spent on social media, online games, etc. What’s unusual about unGlue is that the kids themselves get to earn and manage that screen time.

Linda Eder is a singer and actress. She came to public attention when she won the television talent show “Star Search” for a record 13 weeks in a row.

46. “The Moor already changes with my poison” speaker : IAGO

In William Shakespeare’s play “Othello”, Iago utters the words “The Moor already changes with my poison.” Iago is celebrating the fact that Othello’s mind has already become infected with iago’s devious suggestions.

The original 1-cent coin was introduced in the US in 1793 and was made of 100% copper, giving rise to the nickname “copper” for a 1-cent coin. The composition varied over time, and was 100% bronze up to the 1940s. During WWII there was a shortage of copper to make bronze, so the US Mint switched to zinc-coated steel for production of one-cent coins in 1943. The “steelie” is the only coin ever issued by the US mint that can be picked up by a magnet. Today’s one-cent coin is comprised mainly of zinc.

In the “Narnia” series of books, Mr. Tumnus is a faun, i.e. half-man and half-goat. According to author C.S. Lewis, the whole idea for the “Narnia” stories was born from a single image that he had of a faun carrying parcels and an umbrella through a snowy wood. And that’s just what Lucy sees when she first steps into Narnia via the famous wardrobe.

One can get “stuck in a rut”, perhaps while solving a crossword.

QuickTakes is a biweekly online newsletter issued by the Department of Labor’s Occupational Safety and Health Administration (OSHA).

Captain Hook is the bad guy in “Peter Pan”, the famous play by J. M. Barrie. Hook is Peter Pan’s sworn enemy, as Pan cut off Hook’s hand causing it to be replaced by a “hook”. It is implied in the play that Hook attended Eton College, just outside London. Hook’s last words are “Floreat Etona”, which is Eton College’s motto. Barrie openly acknowledged that the Hook character is based on Herman Melville’s Captain Ahab from the novel “Moby Dick”.

The exploration and use of outer space is governed by the Outer Space Treaty that came into force in 1967. The initial signatories were the US, UK and USSR, and now 102 nations are party to the treaty. For the purposes of the treaty, outer space begins at the Kármán line, a theoretical sphere that lies at an altitude of 100km about the Earth’s sea level.

9. The Wildcats of the America East Conf. : UNH

The University of New Hampshire (UNH) is the largest university in the state. UNH was founded as the New Hampshire College of Agriculture and the Mechanic Arts in 1866 in Hanover. The college was moved to Durham in the early 1890s, which is where UNH’s main campus is located to this day. The school’s athletic teams are known as the Wildcats.

“To cozen” is such a lovely verb! Meaning to cheat or hoodwink, it comes from the Middle English word “cosin” meaning fraud or trickery.

“Rudy” is a 1993 sports biopic about the life of Daniel “Rudy” Ruettiger, who played college football at Notre Dame. The movie is all about the title character’s desire to play football despite countless obstacles. And play he did, albeit very briefly. After that appearance, Rudy became the first player in Notre Dame history to be carried off the field by his teammates.

The term “oater” that is used for a Western movie comes from the number of horses seen, as horses love oats!

That’s if you go out in the sun. Not this fair-skinned Irishman …

Barneys New York is a luxury department store chain. It was founded by Barney Pressman in 1923, with the first store opening in Manhattan. Pressman raised the funds necessary to lease that first retail space by pawning his wife’s engagement ring!

When firing a gun, a “potshot” is a “shot” taken purely to get the prey into the “pot” for cooking. The term was coined in the 1830s, hence distinguishing between a shot taken for sport or marksmanship, and a shot taken as part of a hunt for game.

52. Mountain Pose is a standing one : ASANA

The National Oceanic and Atmospheric Administration (NOAA) is one of the seven federal uniformed services, namely:

The earliest known mention of the name “Atlantic” for the world’s second-largest ocean was in Ancient Greece. The Greeks called said ocean “the Sea of Atlas” or “Atlantis thalassa”.

Josephine Tey was a pen name used by Scottish mystery writer Elizabeth Mackintosh. One of Tey’s novels is “Miss Pym Disposes”, which was first published in 1946.