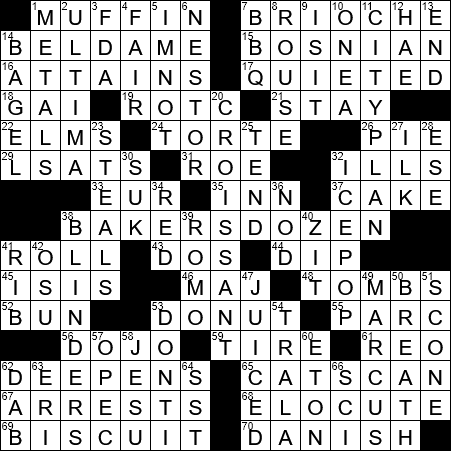 We have a BAKER’S DOZEN of themed answers today, thirteen items sold in a BAKERY:

“Brioche” is a French bread that has been enriched with lots of egg and butter, to the extent that it is also considered a pastry.

A beldam (also “beldame”) is an old woman, especially an ugly one. The term was originally used for a grandmother. In Old English, the prefix “bel-” is used to express a relationship (as in “grandmother”), and “dam” is used in the sense of “mother”.

Sarajevo is the capital of Bosnia and Herzegovina. The city is famous for many historical events. In 1914, Archduke Franz Ferdinand of Austria was assassinated there, the single event that sparked off WWI. More happily, Sarajevo was the host of the 1984 Winter Olympic Games. Just over a decade later the city was the center of the longest siege in the history of modern warfare, lasting almost four years from 1992 to 1996.

The city of Metz is in the northeast of France, and close to the German border. Given the proximity to Germany, Metz has both a strong German tradition and a strong French tradition. Metz was handed over to the French following WWI, after nearly 50 years of German rule. It quickly fell back into German hands in 1940 during WWII, with many German officers delighted to have back the city of their birth. Perhaps because of this long association with Germany, the US Army under General Patton encountered stiff resistance when liberating Metz in 1944. The cathedral in Metz is home to the largest expanse of stained glass in the world, almost 70,000 square feet in all.

Belgium is one of the six founding members of the European Economic Community (EEC) that evolved into today’s European Union (EU). Belgium also acts as host of several international organizations, including NATO. There are two large regions in the country. Flanders in the north is predominantly Dutch-speaking, and Wallonia in the south is predominantly French-speaking. The capital city of Brussels is officially bilingual, although from personal experience I can attest that it is mainly French-speaking even though it is located in the Flemish part of the country.

38. It’s a bit more than it sounds, and hints at this puzzle’s theme : BAKER’S DOZEN

A “baker’s dozen” is thirteen, with the phrase dating back to the sixteenth century. Apparently, the expression comes from the practice of bakers adding one loaf to every twelve, primarily for fear of being fined for supplying fewer loaves than had been purchased.

A CT (or “CAT”) scan produces (via computer manipulation) a three-dimensional image of the inside of an object, usually the human body. It does so by taking a series of two dimensional x-ray images while rotating the camera around the patient. The issue with CT scans is that they use x-rays, and high doses of radiation can be harmful, causing damage that is cumulative over time.

1. Most of the periodic table : METALS

Medieval maps often featured a landmass in the far north called Thule. Even though Thule was sometimes depicted as an island, today’s historians often equate Thule with Norway. The term “ultima Thule” was used in the Middle Ages to denote any landmass beyond the known world.

Nestor was one of the Argonauts, the adventurers who sailed on the Argo with Jason on his search for the Golden Fleece of Greek mythology. In Homer’s “Iliad”, wise old Nestor is noted for giving sage advice. We use the term “nestor” today for any wise old man.

The Selkirk Grace is a prayer of thanks that is noted for its use before a Burns supper, a meal that celebrates the life and poetry of Scotsman Robert Burns. The grace is often attributed to Burns himself, although the text predates the poet.

Some hae meat an canna eat,
And some wad eat that want it;
But we hae meat, and we can eat,
And sae the Lord be thankit.

Josef Suk was a Czech composer and violinist who studied under Antonín Dvořák. Suk became very close with the Dvořák family, and in 1898 married Antonín’s daughter Otilie.

The flag of Poland comprises just two stripes, the top being white, and the bottom red.

The National Air and Space Museum owns one of the retired Air France Concorde aircraft. It is on display at the Smithsonian’s Steven F. Udvar-Hazy Center at Dulles Airport, just outside Washington, D.C.