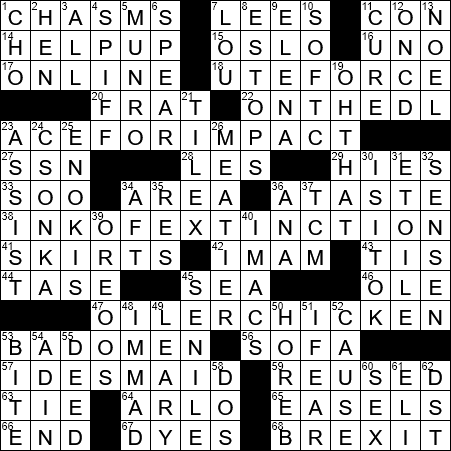 Themed answers are common phrases with a starting BR- removed, a BR-EXIT:

The card game called Crazy Eights is named for the former military designation “Section 8”. Section 8 referred to a category of discharge from the US military, reserved for personnel deemed mentally unfit for duty.

“Humvee” and “Hummer” are nicknames for the military vehicle developed by AM General. The full name is High Mobility Multipurpose Wheeled Vehicle i.e. HMMWV, or simply “Humvee”.

Something described as “on the down low” is “secret”. The phrase is often shortened to “on the DL”, The same abbreviated expression can also mean “on the disabled list” in sports.

Les Nessman is a character in the sitcom “WKRP in Cincinnati”. Nessman is the shy, balding guy who always wears a bow tie.

“To hie” is to move quickly, to bolt.

38 Tattoo depicting the last woolly mammoth? : INK OF EXTINCTION (from “brink of extinction”)

A relatively well-preserved set of woolly mammoth remains were discovered in Siberia in 2012. The remains included some intact cells, and there is talk about the possibility of cloning the animal who died between 4,000 and 10,000 years ago. Scary stuff …

44 Immobilize with a charge : TASE

“Three on a match” is a superstition, one apparently dating back to the Crimean War. If three people light their cigarettes from the same match, then supposedly one of the soldiers would be killed. A further superstition, called “third on a match” was that the third soldier who gets the light would be killed. The rationale was that if an enemy sniper saw the light of a match, he would take aim as the first person takes the light, determine whether he was seeing friend or foe with the second lighting, and then shoot at the third lighting.

57 Hotel employee who only works one day a month? : IDES MAID (from “bridesmaid”)

65 Stands in a studio : EASELS

The UK held a referendum in June 2016 in which 52% of voters chose to leave the European Union (EU). The term “Brexit” was used for the vote, a portmanteau of “Britain” and “exit”. The vote has led to some debate about the future of the UK. The Scottish electorate voted for the UK to stay in the EU, and so that revived speculation about Scotland leaving the UK. There has also been some discussion about Northern Ireland’s future in the UK, as the Northern Irish electorate also voted to stay in the EU.

Margaret Cho is a very successful stand-up comedian, but she is also a fashion designer with her own line of clothing. Cho acts as well, and you might have seen her in the John Travolta/Nicolas Cage movie “Face/Off” in which she played John Travolta’s FBI colleague.

In the story of David and Goliath, the Israelites and the Philistines faced each other in battle at the Valley of Elah. Goliath was the warrior champion of the Philistines and each day he challenged the Israelites to send out their champion to decide the battle in a one-on-one fight. No one was courageous enough to accept the challenge until young David agreed to face the mighty Goliath. David felled the giant soldier with a stone from his sling.

The “cymbal” starts with a soft letter C (cee).

The Cure is an English rock band founded in 1976 that is still going strong today, although not with the original line up. The only top-ten hit the Cure had in the US was “Lovesong”, released in 1989.

Tilex is a brand of tile cleaner made by Clorox that contains a fungicide used to control mildew.

Larry Csonka is a retired professional football player whose most notable years were spent with the Miami Dolphins. After his football career ended, Csonka got quite a bit of work in front of the camera. He has done a lot of television, and even had a small part in the excellent 1976 movie “Midway”.

Sen-Sen was a breath freshener that became available for purchase since the late 1800s.

On a merchant ship, the first mate (sometimes “first officer, chief mate”) is the highest-ranking deck officer, and reports directly to the captain.

Oreo O’s cereal was made by Post from 1998 to 2007. The pieces of cereal were basically O-shaped (like Cheerios) but chocolate-flavored, dark brown in color and with white sprinkles on them. Oh, and lots of sugar.

Denis Leary is a comic who is perhaps better known today as an actor. Leary co-created and starred in the successful comedy-drama series “Rescue Me”, which ran for over seven years. I mainly know Leary from playing the lead detective in the 1999 film “The Thomas Crown Affair”.

In the Book of Deuteronomy, it is stated that Moses was given the Ten Commandments on Mount Horeb. In other parts of the Bible the same event is described as taking place on Mount Sinai. So, many think that Horeb is an alternative name for Sinai.

Inventor Eli Whitney is best known for inventing the cotton gin. Whitney also came up with the important concept of “interchangeable parts”. Parts that are interchangeable can be swapped out of equipment or perhaps used in related designs.