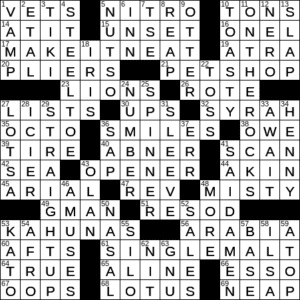 Today’s Theme (according to Bill): Scotch This

Themed answers are phrases one might say when ordering a scotch whisky. Each is clued reference to a particular professional placing that order:

Nitroglycerin (also known as “nitro”) is a very unstable, oily, colorless liquid. It is usually used as the explosive ingredient in a stabilized product like dynamite or cordite. Nitroglycerin is also used medically, as a vasodilator. Right after it hits the bloodstream, nitroglycerin causes the blood vessels to dilate so that the heart has less work to do. I had occasion to take it a couple of times, and boy, what a speedy and fundamental effect it has …

“Li’l Abner” was created and drawn by Al Capp for over 43 years starting in 1934. Al Capp stopped producing the strip in 1977, largely due to illness (he died from emphysema two years later). As the strip finished up, he went so far as to apologize to his long-standing fans, saying that he should have stopped 3-4 years earlier as he felt that the quality of his work had gone down in those latter years. The title character’s full name is “Li’l Abner Yokum”.

45 Type style that sounds like a Disney mermaid : ARIAL

Arial is a basic font.

48 Johnny Mathis classic that begins, “Look at me” : MISTY

“Misty” was written in 1954 by jazz pianist and composer Erroll Garner. Johnny Mathis had a hit with “Misty” five years later, and it was to become his signature tune. The song features prominently in the 1971 Clint Eastwood thriller “Play Misty for Me”, which I suppose isn’t so surprising given the title.

In order to be labelled as “single malt” scotch, the whisky must come from a single distillery (hence “single”), and from a mash of malted grain (hence “malt”) that has been processed in a pot still.

Lotus is a British manufacturer of sports cars and racing cars. If you remember the car driven by James Bond in “The Spy Who Loved Me”, the one that converted into a submarine, that was a custom built Lotus Esprit S1 nicknamed “Wet Nellie”. Wet Nellie was purchased by Elon Musk in 2013, and it actually travels underwater.

A vamp (short for “vampire”) is a seductive woman. The term was first used in reference to the sultry performance of actress Theda Bara in the 1915 film “A Fool There Was”. The movie’s title is a quotation from Rudyard Kipling’s 1897 poem “The Vampire”. Bara’s role was positioned as a “vampire”, a woman out to seduce a man, launching the use of “vamp” as an alternative term for “femme fatale”.

A spinnerbait (sometimes “spinner”) is a fishing lure that spins when moved through the water. As a result, the lure mimics the movement of small fish that are the prey of larger fish.

Henny Youngman was a comedian known for his one-liners, most famously “Take my wife – please!” Youngman grew up in Brooklyn, New York but was actually born in Liverpool in England.

The Green Hornet is a masked crime-fighter who first appeared in a radio show in 1936. The alter ego of newspaper publisher Britt Reid, the Green Hornet fights crime in a long, green overcoat, green fedora hat and green mask. He also drives around in a hi-tech car called the Black Beauty that is driven by his masked partner Kato. Britt Reid’s use of a face mask to hide his identity is reminiscent of the Lone Ranger. That’s because the Lone Ranger was Reid’s great-uncle. Both “The Lone Ranger” and “The Green Hornet” originated as radio programs on local Detroit station WXYZ.