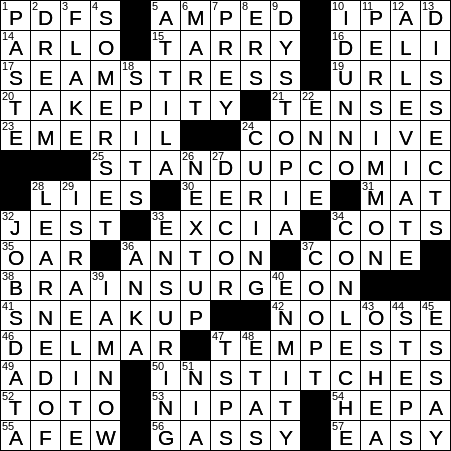 Themed clues each end with “IN STITCHES”:

14 Singer between Melanie and Joan at Woodstock : ARLO

“Melanie” is the stage name of singer-songwriter Melanie Safka. Her biggest hit recording is 1971’s “Brand New Key”. Melanie also wrote and recorded the megahit “What Have They Done to My Song Ma”, which is perhaps better known for the song’s cover versions. Two of Melanie’s children had a hit of their own whey they were just 6 and 7 years old. They recorded a version of “There’s No One Quite Like Grandma” that charted in Canada.

Joan Baez is an American folk singer and a prominent activist in the fields of non-violence, civil rights, human rights and environmental protection. Baez has dated some high-profile figures in her life including Bob Dylan, Steve Jobs (of Apple) and Mickey Hart of the Grateful Dead.

To connive is to conspire with, to cooperate in secret. The term comes from the Latin verb “connivere” meaning “to wink”, the idea being that connivers might give each other a sly wink.

33 Formerly employed by The Company : EX-CIA

The Vikings were a Germanic people from northern Europe who were noted as great seafarers. Key to the success of the Vikings was the design of their famous “longships”. Made from wood, the longship was long and narrow with a shallow hull, It was also light, so that the crew would actually carry it small distances over land and around obstacles. Longships were designed to be propelled by both sail and oars.

Cold Stone Creamery is a chain of ice cream parlors based in Scottsdale, Arizona. The chain takes its name from the frozen granite stone on which servers mix in “toppings” or other flavors of ice cream.

Del Mar racetrack opened in Del Mar Fairgrounds in in 1937. On opening day, cofounder of the Del Mar Turf Club Bing Crosby was at the gate to welcome the track’s first patrons. Del Mar has attracted many Hollywood names over the years. Races run at Del Mar include the Bing Crosby Stakes, the Bob Hope Stakes, the Cecil B. DeMille Stakes, the Pat O’Brien Handicap, the Jimmy Durante Stakes, the Betty Grable Stakes, the Cary Grant Stakes and the Desi Arnaz Stakes.

52 He reveals the Wizard : TOTO

Towards the end of the movie “The Wizard of Oz”, Dorothy’s little dog Toto pulls back a green curtain to reveal the true identity of the Wizard.

Somerset is a county in the southwest of England. Somerset’s county town is Taunton, although the county’s most famous city is Bath.

Bath is a beautiful city in South West England of which I have very fond memories. Bath is an old Roman spa town, and the city’s name comes from the Roman baths that have been excavated and restored.

“House Decorating” is an interior decorating magazine that has been around for an awfully long time. It was first published in 1896.

In Spanish, one might have “café con leche” (coffee with milk).