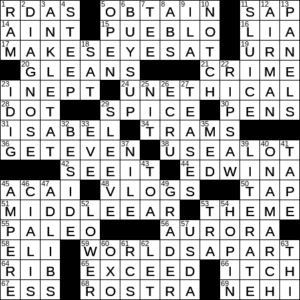 Four rows of the puzzle each include the name of a planet hidden in two PARTS, with a black square dividing the two parts:

A pueblo is a Native-American village found in the American Southwest. The buildings in a pueblo are usually made of stone and adobe mud.

The Lia Fáil is the coronation stone that is found on the Hill of Tara, the traditional seat of the High Kings of Ireland. “Lia Fáil” translates from Irish as “stone of destiny”.

The Parker Pen Company was founded in 1888 in Janesville, Wisconsin by George Safford Parker. Parker had repaired and sold fountain pens as a sideline for many years. With this experience, he created pens that were less likely to leak ink and founded his company based on these patented designs.

Lewis Edson Waterman founded his company to make fountain pens in 1884 in New York City. Even though he produced pens that were technically superior, his company really didn’t take off commercially until after he died and his nephew took over. Eventually, the competition caught up and Waterman had to shut its doors in 1954. The French subsidiary (now Waterman S.A.) survived, and absorbed the US and UK assets.

31 Sanford of “The Jeffersons” : ISABEL

Actress Isabel Sanford was best known for playing the character Louise Jefferson on the sitcoms “All in the Family” and “The Jeffersons”. She won the Primetime Emmy Award for Outstanding Lead Actress in a Comedy Series in 1981, making her the first African-American actress to be so honored.

“All of Me” is a very entertaining 1984 comedy film starring Steve Martin and Lily Tomlin, and directed by Carl Reiner. The storyline is a little fantastic, but hilarious. The Lily Tomlin character ends up occupying the Steve Martin character’s body. Two years after meeting on the “All of Me” film set, Steve Martin ended up marrying supporting actress Victoria Tennant.

A video blog is perhaps what one might expect, i.e. a blog that is essentially a series of video posts. The phrase “video logging” is often shortened to “vlogging”.

51 Where to find a hammer and anvil : MIDDLE EAR

Aurora, Illinois is the second-most populous city in the state, after Chicago. Aurora’s nickname is “City of Lights”, a nod to the early implementation of all-electric street lighting in 1881.

3 Art that may be covered by a sock : ANKLE TAT

Renowned aviator Charles Lindbergh was dubbed “Lucky Lindy” by the press, which was perhaps a reference to his narrow escape in four airplane crashes, including two incidents when he had to deploy his parachute.

22 Tool for cutting with the grain : RIP SAW

47 Deviates from the script : AD-LIBS