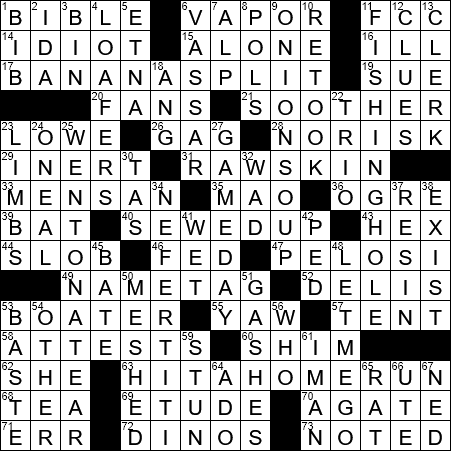 Themed answers each end with something that is SEWED UP:

The banana split was created in Latrobe, Pennsylvania in 1904. This particular sundae was the idea of David Stickler, a young apprentice pharmacist at the Tassel Pharmacy’s soda fountain.

The Great Leap Forward was a government-led campaign to transition China from an agrarian society to a modern communist society in the late fifties and early sixties. Started by Mao Zedong in 1958, the movement was an economic and social disaster. Mao replaced the Great Leap Forward with the Cultural Revolution in 1966.

Frédéric Chopin was a Polish composer who spent most of his life in France. He was most famous for his piano works in the Romantic style. Chopin was a sickly man and died quite young, at 39. For many of his final years he had a celebrated and tempestuous relationship with the French author George Sand (the nom de plume of the Baroness Dudevant). Those years with Sand may have been turbulent, but they were very productive in terms of musical composition.

Speaking as someone who misspells all the time, I find it somewhat amusing that one of the more common words to misspell is “misspell” (written incorrectly as “mispell”).

Nefertiti was the Great Royal Wife of the Egyptian Pharaoh Akhenaten. Nefertiti is relatively well-known in modern times largely due to a 3,300-year-old limestone bust that depicts her rather beautiful features. The painted bust was discovered by archaeologists in the sculptor’s workshop in 1912, and is on display in the Neues Museum in Berlin.

To bate is to restrain, as in “with bated breath” meaning “with restrained breath”. “Bate” can also mean “lessen”, and is a shortening of “abate”.